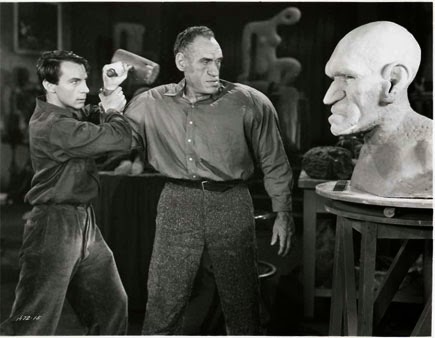 
I mentioned in my review of CAPTIVE WILD WOMAN that in the 1940s Universal Studios' horror movies increasingly took the form of efficient if contrived B-movies, as against the ambitious, often eccentric works of the 1930s. The horror films were increasingly defined as repeating franchises, and the best-regarded of these were continuations or re-interpretations of the "Big Five" from the 1930s."The "Mummy" from 1932 and "Werewolf of London" from 1935 may have served as templates for the continuing exploits of the 1940s Mummy and the Wolf Man, the Frankenstein Monster and the Invisible Man remained reasonably robust in a "series" of films extending back to their beginnings, and even Dracula finally merited a return of sorts in 1943's SON OF DRACULA.

The studio's 1940s regime, however, was not able to birth any vital new franchises. The Wild Woman series petered out in three episodes. Two characters invented for the "Sherlock Holmes" series did no better, with "the Spider Woman" from the film of the same title meriting only one solo outing while "the Creeper" from PEARL OF DEATH managed two-- though admittedly the death of star Rondo Hatton was a big factor in the termination of that series. I rather doubt that there would have been many more Creeper-films had Hatton lived longer, for the second film, THE BRUTE MAN, was not even released by Universal, which by that time had determined to distance itself from B-level horror-films. Given all those factors-- including the fact that in 1948 Universal gave a humorous farewell to four of the Big Five in ABBOTT AND COSTELLO MEET FRANKENSTEIN-- it's surprising that HOUSE OF HORRORS, first of the "Creeper" films, is as good as it is.

I haven't seen every film directed by long-time work-horse Jean Yarbrough. I tend to think that HOUSE OF HORRORS is probably his best work, though arguably it's good because Yarbrough's more or less channeling Robert Siodmak's moody approach to the horror-genre.  The script by George Bricker and Dwight Babcock may be the real "star" of HOUSE, making it possible for the actors-- particularly Martin Kosleck and Virginia Grey-- to shine.

The core of HOUSE's story is as old as the hills: (1) killer commits murder(s), (2) innocent man is accused of the crimes, (3) innocent man's friend or girlfriend goes looking for the truth and uncovers the real murderer. But Bricker and Babcock come up with a good twist on the hackneyed plot, allowing these Hollywood writers the chance to address a subject rarely mentioned in horror films: the question of Art.

To be sure, at base Bricker and Babcock were riffing on the trope of the "mad artist" seen in 1933's MYSTERY OF THE WAX MUSEUM. The script has the Creeper-- recovering from his apparent fatality at the end of PEARL OF DEATH-- rescued from death and taken in by eccentric sculptor Marcel DeLange (Kosleck). This too was a fairly worn trope also seen in PEARL: clever little criminal uses big brutish killer as his catspaw. But Marcel, instead of simply having the grateful Creeper kill for profit, turns him loose on victims whose deaths don't earn Marcel a penny-- though it could be argued that they were stand-ins for people that the scriptwriters disliked: the critics of high culture.

The script of HOUSE is oddly both sympathetic to, and repulsed by, the character of Marcel. Before he meets the Creeper, he's the very picture of the "starving artist." He inhabits a shoddy little studio with only his cat for company, which earns him some sympathy, but he also talks to the cat about how misunderstood his great work is, which makes him seem odd, as is his sculpture, which is expressionistic and non-representational.

Enter a prospective buyer of one of Marcel's statues; a fellow who doesn't know art but will pay other people to tell him what's good. He brings into Marcel's studio professional art critic Holmes Harmon (Alan Napier), who ruins Marcel's chances for a sale by castigating his sculpture. Marcel chases the two men out and then destroys the statue, leaving one to wonder: does this "great artist" really believe in his own work, or is he just as much a worshiper of the dollar as anyone else?

It should also be said that Marcel doesn't rescue the Creeper out of pure benevolence: as soon as the artist sees the strangler's disfigured mug, he compares him to "Neanderthal man" and wants to sculpt a bust of that face-- again, with the hope of reaping great financial rewards. The audience is covertly warned to be suspicious of anyone so pre-occupied with ugliness, and the Bricker-Babcock script doesn't bother to give Marcel any deeper reasons for that preoccupation.

However, when the Creeper gets well he goes wandering from the studio, and encounters what is implicitly a streetwalker. It's not clear if he's trying to approach her as a potential customer-- an unlikely prospect, since he's broke at the time-- but she screams at him and seals her fate. When Marcel reads about the murder the next morning, he adds up two and two, and decides to steer his mammoth ally in the direction of the nasty critic Harmon.

Bricker and Babcock probably don't see Marcel as much more than a "screwball," to use the term applied to him by the writers' lady journalist Joan (Grey). However, the scripters are overtly contemptuous of Harmon. In his conversation with his fourth-estate female colleague, it's clear that Harmon has no real preferences: he pretty much hates everything, be it Marcel's grotesque expressionism or the sunny commercial art of Joan's boyfriend, a painter named Steve Morrow. Joan lightly teases Harmon with the prospect of a date, but it's clear that she doesn't intend to date him: she just wants to make it clear that he has no moral compass and would be theoretically willing to alter his critical opinion if there was something in it for him.  But he never gets the chance to sell out, after the Creeper comes calling.

The script's depiction of Morrow and his commercial art is clearly meant to validate audience-members who didn't hold with all that artsy-fartsy stuff. Morrow produces commercial paintings of leggy female models; ergo, he's "healthy" while Marcel is 'unhealthy."  He's also a "man's man" in that (a) he threatens critics like Harmon when they badmouth his work, and (b) he doesn't want Joan to continue working as a journalist-- ostensibly because she might encounter danger, though it's easy to imagine him as the type who won't allow a wife of his to work.

It's the first demonstration of macho sensibilities that gets him accused of Harmon's murder. When Morrow stymies the cops' investigation with an alibi, one officer talks yet another critic, name of Ormiston, into attacking Morrow in print with the idea of drawing out the killer. Ormiston is a little less poisonous than Harmon, in that he agrees with Joan that Morrow has some real talent-- but the second critic manages to work in some criticisms of Marcel as well, and that gets the Creeper on his tail.

It should be noted that Bricker and Babcock are also careful to keep the alliance of Marcel and the Creeper from earning any sympathies. The Creeper is slow-witted and doesn't understand anything about Marcel's artistic leanings, except that if they don't sell Marcel doesn't make any money, and the Creeper, being wanted, can't go looking for work. Marcel doesn't care about his brutish companion except for the sake of furthering his own career, and at the climax he tells Joan that he plans to let the Creeper take the fall for the murders-- which of course brings the Creeper's wrath down upon his head. This is, incidentally, the only scene in which the director gave Hatton the chance to evince some strong emotion; throughout the rest of the film, he registers hardly any more feeling than one of Marcel's statues.

Though it's clear that Marcel and the Creeper are not good guys, Morrow and Joan are not great specimens of humanity either. Morrow doesn't actually follow through on his physical threats against a couple of older, out-of-shape critics, but he's not starving like Marcel, so he hasn't even got that much of an excuse for his bullying behavior. Joan is clever and likable, and gets many of the saucier lines, but at the conclusion she caves in to Morrow's desire for wifely subordination. Even in B-horror films, the monsters remain more appealing than many exemplars of "normality."

In the end, the script of HOUSE OF HORRORS gives us only a superficial critique of "high culture" critics; there's no evidence that Bricker and Babcock have any idea as to why the snooty critics don't like "low culture," But at least HOUSE, unlike many horror-films of the decade, found a new source of "victims you love to hate"-- a resource that many later films, particularly 1973's THEATRE OF BLOOD, would continue to exploit.
Posted by Gene Phillips at 3:23 PM
Email ThisBlogThis!Share to TwitterShare to FacebookShare to Pinterest
Labels: bizarre crimes and crimefighting (u), freakish flesh (u), perilous psychos (u), the uncanny