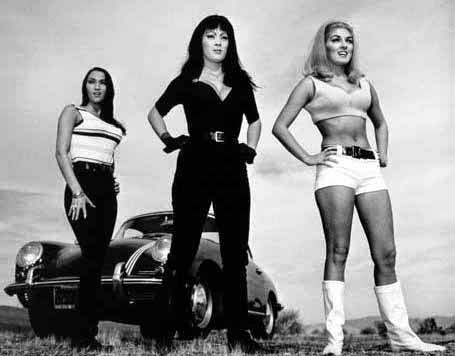 
Aesthetically speaking, it might be for the best that on its initial release FASTER, PUSSYCAT! KILL! KILL! didn't make much money for cult director Russ Meyer. Had it been successful, Meyer might have tried to duplicate that success. Meyer's later works have their partisans, but I prefer his works from the early 1960s. For me Meyer's bawdy cartoon-world worked best when depicted in black and white photography, which also highlighted his mastery of wild camera angles and iconic positioning.

Prior to PUSSYCAT Meyer had completed MOTOR PSYCHO, an enjoyable, and reasonably profitable, biker-film. Both films had their roots in the "J.D. exploitation" genre-films of the 1950s, though Meyer's villainous scofflaws are all adults. With PUSSYCAT Meyer changed out the villainous male bikers for a trio of female go-go dancers obsessed with driving fast cars. The memorable opening scene that introduces the trio-- fun-loving Billie (Lori Saunders), sultry Rosie (Haji) and hard-bitten Varla (Tura Satana)-- begins with all three wildly driving their separate cars along a vacant desert road. While real go-go dancers might have been more likely to economize by sharing one car between them, the ladies' love of tearing up the road, each in her own particular car, makes clear that these women aren't concerned with economy. Whether it's tearing up the road or gyrating in a club for men unable to do anything but watch and hurl catcalls, it's clear that Meyer's women love thrills of all kinds.

While most of the "delinquent films" were morally on the side of the ordinary nine-to-five folks whom the J.D.'s terrorized, it's clear that the script for PUSSYCAT, written by Meyer and two-time collaborator John Moran, is of the devil's party. While tooling out in the desert the girls come across two spunky teens, Tommy and Linda. Tommy's a car nut too, having driven to the desert to improve his racing skills in the open desert, but to Varla he's the antithesis of her "all or nothing" philosophy. "You're the All-American Boy, a safety-first Clyde."she tells him, and this leads to a race between them. In the script's first ironic touch, "safety-first" Tommy proves the better racer, so Varla cheats, sending his car spinning. Tommy recovers, but a subsequent argument results in Varla killing Tommy with her karate-skills. The three go-go dancers leave the dead teen in the desert and vamoose, taking Linda, the sole witness, with them.

PUSSYCAT could at this point have turned into a "criminals-on-the-run" thriller, but the script veers into the terrain of "Western Gothic." While gassing up at a lonely filling station, Varla learns of a strange trio of men who live a hermit-like existence, and decides that her group's best chance for escape is to rob the family of their money so that the dancers can get far, far away from John Law. This isn't an especially logical idea, since the girls have no idea when Tommy might be found. But logic is not important here. What is important is a mythic conflict between a group of three hard-living, road-running women and a family of three men with deep, dark secrets.

The patriarch of the family, known only as "the Old Man," is wheelchair-bound due to a train-accident, which ironically came about because he saved a young woman from perishing. His older son Kirk is more or less normal, though he harbors some suspicions that the Old Man has been conducting illicit activities with the help of his younger son, called only "the Vegetable," a dim-witted hulk who barely speaks. It eventually comes out that the crippled elder, unable to satisfy himself sexually, has been forcing his muscular pawn to abduct young girls, and that the Old Man is particularly interested in shrinking violet Linda.

PUSSYCAT deserves a fuller exposition than I can devote to a single blog-post, but I'll confine myself to saying that the "mythic conflict" is that of women and men, a conflict as much redolent of violence as of sex, as the film's introductory voice-over makes clear:


While violence cloaks itself in a plethora of disguises, its favorite mantle still remains sex. Violence devours all it touches, its voracious appetite rarely fulfilled, yet violence doesn't only destroy. It creates and molds as well.


Georges Bataille, who also equated sex with violence, could not have put it better. Though some previous Meyer's productions, such as MOTOR PSYCHO and MUDHONEY, are full of extravagant language and metaphors, PUSSYCAT is the only Meyer film that concretizes his often erratic themes into a sort of cinematic poetry. I tend to credit co-scripter Moran with giving the PUSSYCAT script greater depth than Meyer's professed major influence-- the LI'L ABNER comic strip-- but there's no way to be sure. Yet whatever Moran's contribution, the manic, unapologetic tone of PUSSYCAT is ineluctably that of Russ Meyer.

Despite my "Western Gothic" remark, there's no hint of the uncanny-metaphenomenal in the tougher-than-dirt world of Varla and her opposite number, the Old Man, with one exception.  The hulking Vegetable does perform one feat of strength that compares with some of the uncanny muscular feats seen in certain Italian peplum: that is, he wins a shoving-match with Varla's car. 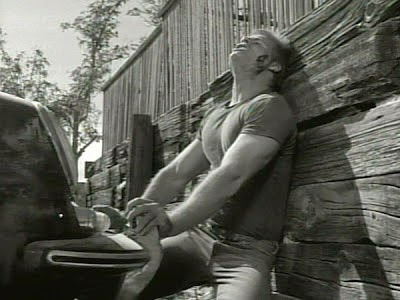 Still, though this is one of the film's great visual highlights, it doesn't conjure with the mood of "strangeness" seen in films like THOR AND THE AMAZON WOMEN.  Thus, even though PUSSYCAT is one of the most mythic films I've ever reviewed here, its mythic structure remains firmly within the realm of the naturalistic.


Posted by Gene Phillips at 3:16 PM
Email ThisBlogThis!Share to TwitterShare to FacebookShare to Pinterest
Labels: combative dramas, the naturalistic