THE SECOND BEST SECRET AGENT IN THE WHOLE WIDE WORLD (1965) 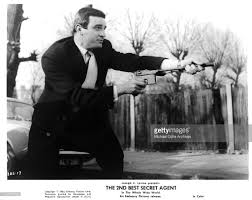 
Lindsay Shonteff, perhaps best known for MILLION EYES OF SUMURU, both wrote and directed this film, which originally sported the Fleming-derived title LICENSED TO KILL. Early in the film the bosses of the titular agent, "Charles Vine," make a few arch references to that other spy involved in the "Fort Knox business," but they can't get him, so they assign Vine to guard a prominent foreign scientist while the latter is in England.

With a set-up like that, SECOND sounds like it ought to be a silly spoof of the Bond films. Yet it's really not a comedy, but an irony, devoting itself to the proposition that "things are not as they seen." The script plays the spy-jinks fairly straight, but they're always a little "off." For instance, when Vine-- no relation to "James Vine" of TARGET FOR KILLING the next year-- is given his weapons for the assignment, they include a pistol so tiny that he can balance it on one finger. With a standard comedy, this would be treated in a silly manner and would eventually lead to some slapstick routine. Vine is rather taken aback by the miniature gun, but he keeps it on his person, and sure enough, it comes in handy in getting him out of a nasty scrape with bad guys.

SECOND isn't exactly a scathing satire of the superspy-subgenre, but some of the incidents are clearly meant to diverge from the usual course of things. In one scene, Vine gets into a conversation with the scientist he's guarding. It isn't funny or particularly dramatic. The scientist, having learned that Vine was once a prominent teacher of mathematics, wonders why Vine went into the far more dangerous profession of government agent. Vine makes no bones about the matter: government work pays well, and he Vine has expensive tastes. A later scene has Vine encounter what appears to be a sexy Asian woman, which seems to betoken the usual Bondian sex-scene. Instead Vine gets into a brutal fight with the "woman," who turns out to be an Asian guy in drag. At the climax, Vine gets into a running battle, through conveniently empty London streets, with an assassin from the other side, but the gunfight is handled dispassionately, as if it could go against Vine any moment. Vine does win the bout, but there's no adventurous sense of triumph going with it.

In contradistinction to the Matt Helm films of the period, the scientist here is a working on a science-fiction idea-- harnessing anti-gravity-- but the marvelous invention is never shown, much less used to make people float around. The miniature gun is nearly the only thing that makes this film metaphenomenal-- though the American release added an opening scene that qualifies as an uncanny "bizarre crime:" an assassin dressed like a nanny, killing a British agent with a sten-gun taken from a pram.
Posted by Gene Phillips at 3:36 PM
Email ThisBlogThis!Share to TwitterShare to FacebookShare to Pinterest
Labels: bizarre crimes and crimefighting (u), combative ironies, diabolical devices (u), the uncanny