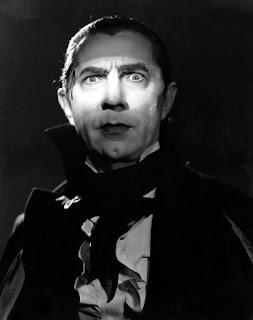 When I reviewed the 1960 PSYCHO, I did so with the knowledge that it had been so exhaustively critiqued that it was difficult to say something new. For that reason I drew comparisons between the film and its somewhat neglected Robert Bloch source-novel. Film critics haven’t written nearly as much about the 1931 DRACULA. But as it’s a classic film and the forerunner of the first horror-craze of the sound era, DRACULA is still pretty well-worn territory.

I’ll again touch on some of the divergences between a film and its source-novel, but only on a few assorted points, particularly since the screenplay reputedly owes less to the novel than to the novel’s stage-adaptation. Still, I think it’s interesting to look at some of the differences as “roads not taken.”

There’s little to say about the film inability to duplicate the novel’s wild supernatural effects. Director Tod Browning had the same considerations as stage productions of the novel: budgetary considerations. Cinematic contrivances did allow Browning and cinematographer Karl Freund (allegedly an associate director in all but name) to give viewers a magnificent illusion of Dracula’s castle, far beyond the resources of theatrical productions. But a major portion of the action takes place in the stagy-looking drawing-room of a manor that doubles as Doctor Seward’s sanatorium, and the one impressive visual seen in Carfax British abbey at the climax doesn’t eradicate the preceding visual tedium.

There are things, though, that a movie could have done as well as a book; things that the DRACULA screenplay didn’t bother to address. The Stoker novel gains great mythic power from picturing modern Transylvania as a wasteland drained by a tyrant who’s been alive for centuries, and who only in 1898 has decided to move on to fresh killing-grounds. Perhaps the Universal film couldn’t give a panoramic view of a whole country. Still, the script could have given more attention to Dracula’s personal history, not least giving him a stronger motive for moving all the way to England. It’s even ambiguous about how long Dracula’s been undead. He makes reference to the “broken battlements” of his land and speaks of the glory of being truly dead. Yet there’s no reference, when the vampire is staked off-camera, to his body's turning to dust (which later becomes a plot-point in DRACULA’S DAUGHTER). Only Bela Lugosi’s superlative performance really sells the image of the Count as the relic of a bygone aristocratic era. This image comes across during the scenes at Castle Dracula, though there’s a similar vibe when he takes as his first victim in London-- a poor flower-seller, before moving on to the higher social strata.

If the character of this Dracula is not as rich as Stoker’s creation, the character of Renfield certainly profits from the changes of the 1931 film. In the novel, he’s just an insane fellow in Seward’s nuthouse. Dracula uses Renfield as a pawn until the demented man becomes fascinated with Mina and betrays his master. Film-Renfield is far more memorable, changing from a slightly stuffy solicitor to a debased mirror image of his master: his passion for devouring insects stemming from an "Imitatio Diaboli." His doglike devotion to Mina isn’t as well developed as it is in the novel, and he doesn’t get a scene in which he’s in any way tempted by the attentions of Dracula’s wives. Still, Frye’s performance as the vampire’s slave may define Renfield even more than Lugosi defines Dracula. 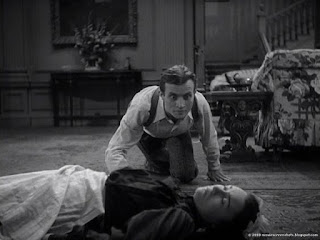 In contrast, though, Stoker’s resourceful Jonathan Harker becomes a thoroughly meat-headed swain who’s something of a headache for vampire hunter Van Hesling. Edward Van Sloan provides a fine methodical vampire-hunter, though over the years Van Helsing has proven elastic enough to allow for a variety of re-interpretations. 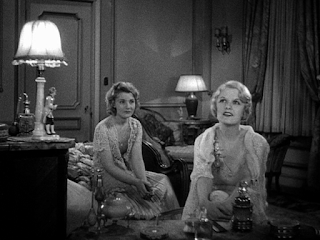 Central to the novel’s structure is the “bad girl/ good girl” dichotomy that many critics consider innate to the culture of Victorian England. The movie makes Mina Murray, who in the book is the friend of the more upper-class Lucy Westenra, the daughter of Doctor Seward. The movie does keep the idea that Dracula goes for Lucy, the “easy get,” before going on to Mina, the “hard get.” This Lucy, though, isn't noticeably upper-class and doesn’t have three men courting her, and the only thing that makes her a little “bad” is that she shows an ardent fascination with Count Dracula even before he starts talking about his “broken battlements. ” In contrast we have “good girl” Mina, who’s securely engaged to the dishrag Harker, which seems to be all that's especially "good" about her. The script mangles the story-potential of Lucy’s vampirization, possibly eliding any conclusion to her plot-line-- which is particularly grisly in the book-- to avoid alienating the audiences of 1931. As for Mina, she lacks the heroic, yet still feminine, dimensions of Stoker’s creation. Only in one sequence does she consciously resist the influence of Dracula after having been forced to drink his blood and become a “pre-vampire.”  Helen Chandler’s best moment with the character occurs when she begins displaying the predatory nature seen in Dracula’s wives. But this scene remains a tease, so that some other actress got the honor of acting out the first female-on-male fanging of cinema’s sound era.

The vampire-mythology of Browning is nowhere near as well developed as Stoker’s, but again, it must be admitted that a book has much more space in which develop such matters. Yet it’s arguable that the movie DRACULA had a far more transformative effect on American cinema than Stoker’s novel did on British fantasy-fiction. There were several novels in the 1800s that might equal DRACULA in terms of developing fantastic concepts. But in American silent films, it was a rare thing to see full-blown fantasy-concepts developed to their utmost, with occasional exceptions like the 1924 THIEF OFBAGDAD and the 1929 MYSTERIOUS ISLAND. Films in the horror subgenre tended toward the uncanny form of the Gothic, with stories like THE CAT AND THE CANARY. But Stoker’s freewheeling synthesis of vampire legends hearkened back to works of marvelous horror like VATHEK and THE MONK, to say nothing of working in a probable parody of Christian lore. 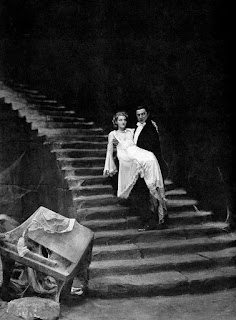 The film’s script is talky, but this has the advantage of laying out the mythology of vampires in a way that a silent film could not. The Count seems positively Satanic as he battles with Van Helsing over the soul of Mina, imparting a mythic vibe to a phrase like, “I shall see that she dies—by night!” He doesn’t succeed, partly due to Renfield’s betrayals. The final scene in Carfax Abbey manages to put across this vibe too, despite Browing’s clumsy mounting. We see Van Helsing and Harker penetrate the abbey, where they find Dracula inert in his coffin. Then Van Helsing kinda-sorta opens another coffin, in which he seems to anticipate finding Mina—though for some reason he doesn’t really look into the coffin. Then there’s a cut to show Mina still alive, off to the corner—and only then does the professor look again, and find the second coffin empty. I would guess that this bit of business is another inheritance from the stage-adaptation, but though it’s far from riveting, it did make me wonder if the scene might have been derived from the Gospel story in which Christ’s followers visit his sepulcher and find it empty. Such a reworking—which resembles nothing in the novel-- compares favorably with Stoker’s recasting of other Christian motifs, even if the film’s Mina is no heroic sufferer; merely a prize to be protected by her future husband and his elderly preceptor. I imagine that Browning was aware of some of these aspects of the original, but I don’t get a sense that they signified anything but aspects of a job he’d been assigned.

That said, DRACULA remains a major game-changer in American cinema. If it had not been made at that particular time—if, say, FRANKENSTEIN, also a popular stage-play, had gotten there first—the game still would have been changed. Still, of the two the vampire-lord has deeper roots in myth and folklore, and so for that reason I’m glad that DRACULA was the first “marvelous Gothic” out of the gate. Bela Lugosi never got another role nearly as crucial as this one, and he certainly had reason to regret being typed as a horror-actor. Still, since he’d been largely doing a lot of exotics and functionary-types before DRACULA, he could have faced a worse fate for an actor: that of total obscurity. Becoming an icon doesn’t always make you rich, but it does provide one with a curious kind of “life after death.”
Posted by Gene Phillips at 2:17 PM
Email ThisBlogThis!Share to TwitterShare to FacebookShare to Pinterest
Labels: the marvelous