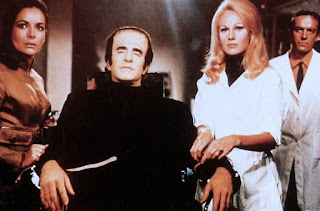 ASSIGNMENT TERROR is, in effect, the second entry in Paul Naschy's "Daninsky-verse," following FRANKENSTEIN'S BLOODY TERROR. Although another film, NIGHTS OF THE WOLFMAN, took place between these two films, it was either unfinished, lost, or both. Still, whatever took place in NIGHTS, the second TERROR seems to follow through on plot-threads from the first one. Naschy's "El Hombre Lobo," shot to death in the first film by the woman who loved him, is now revived with the excuse that the werewolf can only be permanently destroyed if the woman is willing to die with the monster (!) In addition, the werewolf's vampire foe from the 1968 movie is also revived, though with a slight name-change, assuming imdb credits are accurate to the two films. The vampire has so little time in ASSIGNMENT that one wonders why the scripter-- who was also werewolf-actor Naschy-- bothered to bring him back.

I've given this erratic Eurofilm a "fair" rating in the mythicity department simply because the crazy script displays a sincere affection for the horror-tropes developed by Universal Studios in the 1940s, particularly in "monster mash" films like FRANKENSTEIN MEETS THE WOLF MAN. That said, Naschy's script has less in common with the Universal classics than with Ed Wood's most famous work, PLAN 9 FROM OUTER SPACE. Wood's magnum opus dealt with aliens resuscitating dead people in order to throw the planet Earth into chaos. There's no way to know if Naschy ever saw PLAN 9, but he uses the same essential idea here. The motivation is a little different, though. Wood's aliens wanted to prevent Earth-people from creating a deadly super-weapon, while the aliens from Naschy's "Planet Ummo" want to eliminate Earth-people because Ummo stands in danger of destruction.

Given that the Ummo-ites are on a time-clock, they seem to take their sweet time unearthing famous monsters of Earth's history, but never get around to using them as part of any specific program to get rid of humanity. Half the time Naschy's script seems to treat the Ummo-aliens-- who are, incidentally, alien intelligences who have taken over human bodies-- as if they were just examining all the monsters as part of a big research-project. This idea finds some support in the fact that the main three-- Warnoff, Kieran, and Maleva-- talk a lot about how they've advanced beyond the petty emotions of humankind. Naturally, it proves easier for the aliens to talk the talk than to walk the walk. When alien Maleva beholds the manliness of Waldermar Daninsky, it gives her some human stirrings, and though leader Warnoff continually claims to be above emotion, he subjects another female minion to electrical torture with a sort of suppressed sadism.

Waldemar, as I said, is resurrected when the aliens pull the silver bullet out of his body, conveniently mentioning that he didn't really die because his lover didn't have the decency to die with him. In addition to reviving Waldemar, the aliens find the vampire "Jamos" in a traveling carnival, a scene lovingly swiped from HOUSE OF FRANKENSTEIN.  The Ummosians also bring back a mummy named Tao-Tet and a Frankenstein Monster whose proper name is garbled, at least in translation. (Was someone afraid that the producers would get legal static from Hammer Films, who were still coming out with Franikenstein films?) The werewolf and vampire both get free a few times, and cause enough havoc that a tough local cop starts looking for monsters.

The cop does get one strong scene, staking Janos the Vampire, but El Hombre Lobo does most of the heavy lifting Mummy-characters have typically got the short end of the "monster mash" stick, so I can appreciate that Naschy's script concocts a decent enough battle between the hairy guy and the bandaged dude. In fact, the werewolf's method for destroying the mummy, turning him into a Catherine Wheel, is rather ingenious. It's an improvement on the fight between the wolf-man and the artificial monster, anyway. It's a given that this cheap production couldn't equal the fight-scene from FRANKENSTEIN MEETS THE WOLF MAN, but it's also sabotaged by the decision to have the actor playing the monster look like his eyes are always closed. (Admittedly, ABBOTT AND COSTELLO MEET FRANKENSTEIN used the same peculiar visual trope, and to no better effect, given that the monster was no longer blind at that point, as he had been a couple of earlier films.) This time the werewolf's claws are given the chance to shed more a lot more monster-blood than they did in the Universal film, though.

In the end, Waldemar and his beloved embrace death, and the aliens give up on their plot to exterminate humankind, with a little moralizing about the superiority of human emotions. Waldemar would then come back again and again, often with a brand-new origin and no connections to any earlier entries.