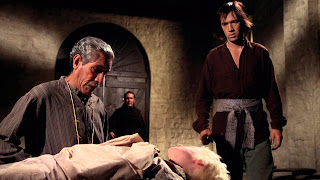 
In "The Brujo," Caine has apparently wandered down toward the Mexican border, since in this episode he'll find himself in San Martin, a town inhabited by people of Mexican ancestry. They even have a "grandee" of sorts in wealthy landowner Don Emilio (Henry Darrow), though the real power in San Martin is a male witch (brujo) named Carlos. The audience witnesses the brujo pronouncing a spell of some sort, while far away, a wagon crashes in the rocky wilderness. Caine happens across the wrecked vehicle, and discovers its two occupants. One is a young Caucasian boy with white-golden hair, who is unharmed; the other, an old Mexican woman who dies despite Caine's efforts to help. The relationship of the two is never explained. nor the reason for their being in the wagon, but the old woman charges Caine with returning the child to San Martin. Somewhat later it will be attested that the woman inhabited the town, and that she had the reputation of a witch, but the reason as to why she drew the hostility of Esteban is not made explicit.

Before Caine reaches the town, he and the boy encounter Don Emilio, who has apparently been hunting with a trained hawk. The nameless boy beckons to the hawk and it flies to him, establishing that he, like Caine in certain episodes, possesses at the very least a strong affinity with lower animals. Emilio recalls his hawk with some difficulty and makes a note to watch Caine and his charge.

Once Caine reaches San Martin, he finds that the town suffers under the curse of Carlos. Caine successfully treats an infant whom the townsfolk believe to be cursed, but Carlos claims a new victim. The nameless boy, apparently affected by the brujo's voodoo-like magic, falls into a coma and Caine cannot revive him, because the boy believes in the magic. Apparently the boy resided in San Martin as well as the witch-woman, since it's said that the reason he falls sick is because he believes in the power of Carlos. Caine confronts Carlos and learns only that the brujo is utterly heartless and consumed with a desire for power. Later, he extends his power over Don Emilio, who once slept with Carlos's wife, but learns that Carlos sent the woman to Emilio in order to seduce him to evil. Carlos's game plan is to assume Emilio's temporal power and totally subjugate the town.

Structurally the episode resembles a scenario familiar in many genres of popular fiction: one in which a outsider, usually Caucasian, enters a community, often made up of "People of Color," who are in the thrall of superstitions, sometimes manipulated by a phony priest or witch-doctor. "The Brujo" is subtler than the standard depiction, however, and not only because Caine is half-Chinese (regardless of the actual ethnicity of the actor, of course). Within the naturalistic context of the standard scenario, magic and superstition possess no reality. Yet in this tale, the audience doesn't know for certain that the Brujo has not used magic to wreck the wagon, nor that the nameless boy has not reached out to the hawk with his mind. All that the audience for this episode can say with certainty is that some of the Brujo's power depends on keeping the community under his thumb, and the community obliges by celebrating "the Day of the Devil," an implicit expiation-rite. When Carlos finally decides to prove his power to Caine, he draws a circle around the Shaolin priest-- with a devilish pitchfork, no less-- and tells Caine that he will die when the shadow of the church's cross passes over the circle. Caine obligingly waits, and breaks Carlos' power by declining to give in to his legerdemain. It helps that back in China, Young Caine briefly interacted with a magician who promised the boy "the secrets of the universe," though the youngster fled and returned to the safety of the Shaolin temple.

"The Squawman" contrasts with "the Brujo" in that it's all about the power a community can have over an individual, even one whom the community has more or less cast out.

Caine-- who in this season has almost totally forgotten his quest to locate his half-brother-- wanders onto the ranch of Marcus Taylor (Jack Elam). Marcus is largely secluded from the nearest town because he's a "squawman," a white man married to an Indian woman, who in this case is named Kiona and is pregnant with their first child. While Caine is enjoying lonely Marcus' hospitality, a thief tries to steal the rancher's horse. Caine fights the man, but Marcus, assuming Caine is in mortal danger, shoots the thief dead.

Marcus, Kiona and Caine take the body to town to report the death. At first the townsfolk seem suspicious of Marcus, not only because he married an Indian but also because they've been plagued with bandit-raids, and someone wonders if Marcus might be an ally of the outlaw-gang. Then the crowd's mood changes when the slain thief is identified as a member of the same gang. Immediately everyone in town wants to be Marcus's friend, though they won't allow his Indian wife to enter the local saloon. Worse, the townsfolk talk Marcus up into thinking he's a hero, so that he seriously thinks about meeting the outlaws when they come to avenge their dead comrade. Caine uses his skills to save Marcus and Kiona from the bandits, and teaches Marcus a lesson about false glory.

In "The Spirit Helper" Caine again crosses paths with superstition, though this time the priest is unable to dispel it. Caine happens upon a young Indian brave, Nashebo (Don Johnson) when the latter has been undergoing a vision-quest for days. Nashebo assumes that the gods have sent Caine as a "spirit-helper," and Caine cannot convince the brave otherwise. The Indian youth specifically wants Caine to show him how to become a man.

When Nashebo escorts Caine back to his camp, however, he finds that he needs more help than he thought. A gang of robbers has despoiled the camp, killing Nashebo's father and taking his mother captive to be sold as a slave. This brings forth bitter memories for Caine, whose parents were slain in China by the violence unleashed by a petty warlord, General Chung. Caine's experience made him thirst for vengeance on Chung, though he transcended that desire to an extent thanks to the Shaolins who took him in. Still, though Caine will not help Nashebo seek vengeance on his father's murderers, he is obliged to lend the young man aid to help rescue his mother. It may be argued that this gives Caine the chance to put some of his own demons to rest, by fighting robbers who have perpetrated a deed not unlike that of General Chung.

The robbers, as it happens, have a ruthless leader named PIke, a towering Irish brawler who cheerfully kills one of his own men to keep the others in line. Events culminate with Caine fighting Pike in single combat, and when Caine wins, he has to keep the other bandits from adopting him as their new leader. In addition to saving Nashebo's mother, he also prevents the young brave from murdering Pike-- though the audience is not denied satisfaction, as it's indicated that Pike won't enjoy any tender mercy from his former minions, once Caine and company have departed.
Posted by Gene Phillips at 2:04 PM
Email ThisBlogThis!Share to TwitterShare to FacebookShare to Pinterest
Labels: combative adventures, phantasmal figurations (u), the naturalistic, the uncanny