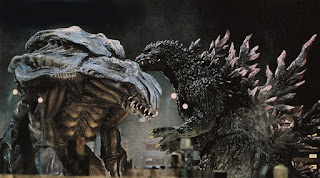 
GODZILLA 2000 started out the "Big G" reboot known as the Millennium series, but 2000 is somewhat less than "millennial" in quality.

The film runs two parallel plot-lines which eventually dovetail, but to no great effect. The principal viewpoint characters are members of a small group of "Godzilla sighters," made up of scientist Shinoda, his precocious young daughter Io, and a jaded lady reporter, Yuki, who hangs around with them to get advance info on the monster's rampages. Shinoda makes clear in his speeches that he wants Godzilla contained but not destroyed, since he's an important example of post-nuclear adaptation. However, the "Godzilla Prediction Network" has no clout, and the officials of the "Japan Self Defense Force" continue with their plans to destroy the giant reptile. In fact, the JSDF is led by the obsessive Katagiri, whom Shinoda knows from his days working for the same organization. Both the scientist and the military commander are fairly flat figures, designed to embody "good view of Godzilla" vs. "bad view of Godzilla."

The JSDF is also responsible for giving Millennium Godzilla his first sparring-partner, when the military tampers with a sunken UFO. The UFO comes to life and promptly seeks out Godzilla, blasting the reptile in order to harvest the creature's DNA. However, the aliens in the UFO can't control the monster's "wild card" genes, and the whole shebang-- the craft and whatever beings are inside it-- morph into a big monster, whom the Japanese dub ":Orga," There's a seesaw battle between Godzilla and Orga, which Godzilla predictably wins. Katagiri actually gets the best scene: roaring his defiance of Godzilla just before the monster destroys him.

While Ogra is a dull opponent that made me long for the days of the Smog Monster, 2000 at least boasts an impressive new design for Godzilla, certainly better than the slinky iguana-critter from America's 1998 GODZILLA. The 2000 film even does its own version of the 1998 film's much longer and more involved "car fleeing big monster's feet" scene. Still, the Japanese characters are not as appealing as those of the American version, much less those of the earlier "Heisei period." 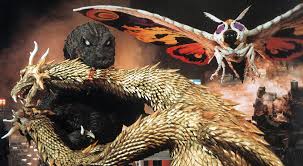 2000 was followed by the equally weak GODZILLA VS, MEGAGUIRUS, which allegedly did not do well at the Japanese box office. This spurred the producers of the next fun to attempt another "monster mash" with roots in the original Godzilla-series. Originally the plan was to oppose the Big G with three revamped versions of Angilas, Varan, and Baragon, though only Angilas had any explicit connection with Godzilla's series. Marketing considerations led to the use of Mothra and King Ghidorah, who had always been two of Godzilla's more popular foes. The stratagem proved profitable, as the third film did very well, despite (or because of) its exhaustingly long title:GODZILLA, MOTHRA, AND KING GHIDORAH: GIANT MONSTERS ALL-OUT ATTACK.

Picking up on some of the more mystical elements from the Heisei days, ATTACK advances a new origin for Godzilla's three opponents. Now Mothra, Baragon and Ghidorah are all spiritual defenders of Japan, and all are much less powerful than in their earlier versions. This time there's no strong opposition between the military and civilians, for the main viewpoint character is reporter Yuri Tachibana, daughter of Commander Tachibana of the JSDF. There's a minor conflict between the two over the proper investigation of Godzilla, but by film's end they are reconciled-- not that their interpersonal drama is all that interesting.

Despite the film's box office success, I found the battle-scenes routine at best, and even a scene in which Mothra and Ghidorah fuse to produce "King Ghidorah" did not help. Baragon actually gets the best scenes, for though he's no match for Godzilla, his burrowing-talent literally knocks Godzilla's feet out from under him-- which is something you don't see every day in Big G films.

Posted by Gene Phillips at 3:48 PM
Email ThisBlogThis!Share to TwitterShare to FacebookShare to Pinterest
Labels: combative dramas, the marvelous