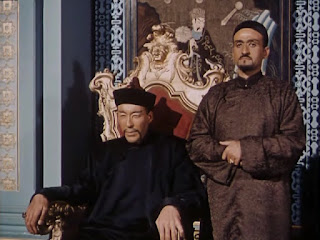 
TERROR OF THE TONGS is reputedly a remake of Hammer's STRANGLERS OF BOMBAY, which I have not seen, and which concerned the Thuggee in British India rather than the Tong organization in British Hong Kong circa 1910. The film's main significance to metaphenomenal film-fans is that, though TERROR is not a metaphenomenal film itself, it anticipates British actor Christopher Lee's "yellowface" performance as Fu Manchu, beginning with 1965's THE FACE OF FU MANCHU. Lee's villain here may have been loosely influenced by the example of Fu Manchu in various media, but he lacks the devil-doctor's formidable character, and suffers from a risible name that just happens to be the same as that of several modern restaurants: "Chung King."

The film opens by illustrating the Tong's power in Hong Kong, which local police and civic organizations are powerless to combat. The Tong men usually keep their activities of vice and drug-smuggling confined to their fellow Asians, but two of Chung King's men make the mistake of killing the daughter of a prominent, two-fisted British seaman, Captain Sale. Sale then rushes from pillar to post like an early version of TAKEN's Liam Neeson, seeking to find his daughter's murderers, and the Tong proves incompetent to kill him. Eventually Chung King's men manage to take Sale prisoner, which leads to the film's one memorable line, "Have you ever had your bones scraped, Captain?" Sure enough, Chung King's torturer demonstrates the technique of inserting a blade into Sale's flesh in order to affect the bone beneath. Sale only survives because an agent opposed to the Tong-- one of the civic organizations I mentioned-- saves his life. Eventually there's a public confrontation between
Sale and a Tong killer, and Sale's victory backfires on Chung King's organization, as the tyrannized populace storms the Tong HQ and the villain commits suicide, thus avenging Sale's daughter.

The script by Jimmy Sangster is reasonably tight, and though most of the Asians are played by British actors, there's a saving grace in the fact that the only reason Sale makes so much progress is because he's given covert aid by the anti-Tong group. Thus, this isn't entirely a "white savior" film, but one in which he acts more as a catalyst to help the Chinese people save themselves. On the minus side, a hot young Chinese woman named Lee attaches herself to Sale, and it's implied that she gives him some romantic recompense for helping free her from her Tong slavemaster. There's no romance as such between the characters of Lee and Sale, and it may be fairly argued that Lee is just a standard "hot Asian babe" fantasy. I don't always object to such fantasies, but here its presence highlights the superficiality of the characters.

The Tong registers as a "weird society," and their one use of torture-- later quoted in 1986's ARMED RESPONSE-- qualifies as a "bizarre crime." But both of these are entirely naturalistic in tone.