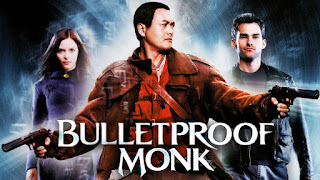 
I've never read the 1998 comic book on which MONK is based, but I tend to think that the filmmakers were no more indebted to their source material than were the MEN IN BLACK films. The main idea seems to have been to find a vehicle for Chow Yun-Fat following the success of his 2000 film CROUCHING TIGER, HIDDEN DRAGON. In MONK Chow again plays a martial-arts master with a human side, but MONK's script is bereft of any psychological or sociological insight.

I imagine that if MONK debuted in theaters today, there would be protests about having a Caucasian character mentored by an Asian. Concerns about "cultural appropriation," after all, informed much of the response to the Netflix IRON FIST series. I could wish that MONK willfully flew in the face of such political correctness, but the movie's script is not clever enough to play with the tropes it invokes.

Kar (Seann William Scott) is a pickpocket with a penchant for amateur martial arts. He encounters a Tibetan monk (Yun-Fat) who has spent the last sixty years guarding a mystical secret from the hands of a ruthless Nazi overlord, and frankly, the Monk-- who has foresworn the name he was born with-- would like to turn the task over to someone else. He can only do so if certain prophecies reveal the proper candidate, and it seems to be none other than Kar.

There's a lot of shooting, running around, and fighting, moderately well handled but nothing memorable. Chow, Scott and female lead Jamie King are all appealing, but Chow's character never catches fire, so his relationship with Kar goes nowhere. The quarrelsome relationship of Kar with King's character is more enjoyable-- as are King's own martial maneuvers-- but again, been there, seen that.

A decent timekiller, no more.
Posted by Gene Phillips at 3:48 PM
Email ThisBlogThis!Share to TwitterShare to FacebookShare to Pinterest
Labels: combative adventures, the marvelous