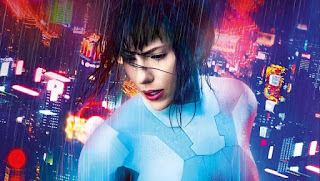 
GHOST IN THE SHELL, though it's more coherent than some of Masamune Shirow's original manga, isn't a patch on the best of the anime movies. However, it's far from the critical disaster some have called it.

GHOST is the second feature-film from Rupert Sanders, who scored well with 2012's SNOW WHITE AND THE HUNTSMAN, a riff on the famous fairy tale. With GHOST it seems like the director and writers felt constrained to follow the manga as nearly as possible, including Shirow's indebtedness to 1982'S BLADERUNNER. Ironically, Sanders might have done better to be a little more free-flowing in their adaptation, just as BLADERUNNER itself was with respect to its Philip Dick source-novel.

The film starts off with amnesiac heroine MIra Killian (Scarlet Johansson) awakening to her new life as a robot with partial memories of her former human existence. Some of the first lines of dialogue involve Mira's "re-creator" Doctor Ouelet justifying the title for any puzzled viewers, dutifully explaining that Mira's original human consciousness, her "ghost," has been installed in an entirely robotic body, the "shell." Ouelet's motives are benign, but not so much the aptly named Cutter, head of Hanka Robotics. Mira finds herself touted as the vanguard of a new cyber-species in a world where many citizens opt for "cyber-enhancement." Cutter oozes villainy from the start, and when he maneuvers things so that Mira becomes a counter-terrorism officer, not many viewers will doubt that Mira's supposed origin may be something of a "ghost" as well.

Mira initially accepts her new role and throws herself into pursuing enemies of the state, such as Kuze, a madman who has mounted a terrorist campaign against many of the businessmen behind the robotics company. It will transpire that Kuze is an aborted "ghost in the shell" experiment, but one who, unlike many others, survived to wage war on the company that re-created him, only to throw him away.

Even for a film several months old, this isn't much of a reveal, just like Mira's discovery that her body died under suspicious circumstances. GHOST's plot feels like it's made up of the "shells" of older SF-ideas, and most of the characters feel well-used also, with the exception of Johansson's Mira.

In the original manga-anime concept, robotic Mira is given the appearance of a Japanese woman, which is in line with her original human identity, a woman named "Motoko." The film may have been hurt at the box office by the self-professed enemies of "whitewashing," who have argued that any race-bending of a Caucasian into a POC is desirable (as I noted in reviewing the IRON FIST series), and anything that goes the other way is evil, evil, evil. But Johansson's sensitive performance is one of her best, overcoming the limitations of the well-traveled material, and it's hard to see how the performance would have been better just because a Japanese actor played the role.

There's a standout scene in which an invisible Mira pursues an armed hitman. Despite the breakthroughs in CGI, I haven't been impressed by a lot of "invisible man" films in the last fifteen years. But GHOST does put across one of the more memorable "invisible person vs. visible person" fight-scenes within recent memory.
Posted by Gene Phillips at 3:27 PM
Email ThisBlogThis!Share to TwitterShare to FacebookShare to Pinterest
Labels: combative adventures, the marvelous