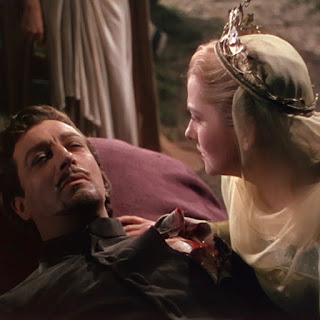 On my philosophy-blog I've devoted two posts to Walter Scott's most famous novel IVANHOE: here and here. Despite the book's status as a classic-- as well as being Scott's best-known title-- neither it nor other Scott works get many props for their complexities. Scott is often dismissed as a writer of lightweight adventure novels, which IVANHOE at least is not. But one could easily get that impression from the 1952 MGM film-adaptation of the book, even though it's probably the best-known of the cinematic translations.

Only one element of the novel even comes close to proving relevant to this blog's phenomenological concerns: the fact that for most of the book a mysterious "Black Knight" interacts with the hero, his opponents, and his allies, and his identity is not revealed until close to the end. Neither the Knight's general appearance nor his use of his armor to conceal his identity move the book into the realm of the uncanny; both are naturalistic, for the same reasons I discussed in this essay with regard to the "Masked Rider" of Zane Grey's RIDERS OF THE PURPLE SAGE. The movie elides the figure of the Black Knight, though oddly, the hero Ivanhoe appears in all-black armor for the tournament-scene, and he duplicates some of the actions of the novel's character in that scene.

In the essay regarding centricity, I disagreed  on another essayist's notion that Ivanhoe was not the hero simply because he wasn't all that interesting, though I admitted that Scott devotes much more authorial attention to two supporting characters. One is Rebecca the Jewess, who falls in love with Ivanhoe even though he's pledged himself to the Christian Rowena. The other is the villainous knight Bois-Guilbert, who falls in love with Rebecca. The knight's love for the Jewish maiden proves his downfall. At the climax Rebecca is accused of witchery, and can only escape burning if a champion defends her in combat. Bois-Guilbert is put in the unhappy position of fighting for the side that wants Rebecca burned, while Ivanhoe-- wounded in an earlier battle-- volunteers to contend for Rebecca's life. This leads to an unusually subdued contest for such a battle-heavy adventure-tale, for the first time Bois-Guilbert crosses weapons with Ivanhoe, the evil knight falls dead, killed not by any would but by the "contending passions" between obeying his superiors and preserving the life of Rebecca.

Apparently someone involved with the 1952 film agreed that both Ivanhoe and Rowena were rather dull characters in the book, for the film's script builds them up to function more like the typical lead hero and heroine of the average swashbuckler flick. Robert Taylor (a very athletic looking 41 years old) does a credible job building up the image of Scott's noble knight. Joan Fontaine's Rowena has more scenes that the prose version did, but trying to make Rowena more than the typical "hothouse flower" is a doomed endeavor.

Sadly, the script drops the ball regarding Rebecca (Liz Taylor), her tragic love, and her representation of the Jewish people's travails in 12th-century Christian England. The novel dramatizes the sufferings of the scattered Jewish people under the Christian aegis; the film barely touches on Scott's theme of ethnic equality. Further, Taylor's Ivanhoe never nurses even a secret attraction for Rebecca; he just remains dully loyal to dull Rowena. And although Bois-Guilbert is allowed to express passion for the Jewess, the filmmakers unfortunately cast George Sanders in the role. Sanders had his virtues, but his urbane persona didn't allow for much expression of passion.

Other plotlines involving Robin Hood and the Knights Templars are minimized or eliminated, though the scripters did come up with a way to unify Scott's sprawling novel: emphasizing the heroes' goal of rescuing England's rightful king, Richard the Lion-Hearted, from his imprisonment in Austria. But although the film was nominated for an Oscar, it seems pretty workmanlike, except for the cinematography and the action-scenes. In keeping with audience-expectations, the climactic battle of Ivanhoe and Bois-Guilbert is not forestalled by the villain's achey breaky heart. Ivanhoe fights the villain and wins, though Bois-Guilbert in death is at least given a final scene to express his unrequited love for Rebecca.
Posted by Gene Phillips at 2:42 PM
Email ThisBlogThis!Share to TwitterShare to FacebookShare to Pinterest
Labels: combative adventures, outre outfits (n), the naturalistic