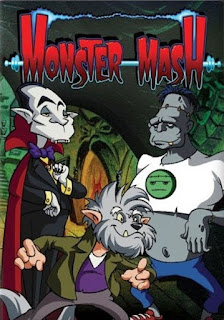 
Having been a fan of Universal horror for many years, I can appreciate the basic intent behind this Italian-American salute to Universal's "Big Three of Terror." The direct-to-video animated film has the virtue of brevity-- it's only a little over an hour-- and it sticks close to its one idea without wandering about.

Perhaps owing something to the mold of "Casper the Friendly Ghost," three goofy-looking monsters have to prove that they can still scare modern audiences. Drac, Frank, and Wolf are told that they no longer impress the younger generation, which has become enamored of more violent, visceral feat-figures. The three has-been horrors, who once strutted their stuff in scary movies, have perhaps been guilty of contributing to their own bad reps, as they're shown doing tricks on stage like vaudeville performers. (The script misses a logical step when it doesn't show the middling monsters making movies with analogues of Abbott and Costello, since a few critics deem A&C movies a comedown for the Universal fiends.) Given that they've all fallen so low anyway, it doesn't seem that much of a threat, when the Superior Court of Horrors threatens them with spending the rest of their lives entertaining at kids' parties. Their only hope of escape: terrify the members of a typical American family, the Tinkelmeisters.

For the most part, the three monsters fail with various comic consequences, but they prove just so gosh-darn lovable that even the Tinkelmeisters try to help them succeed. Still, three modern monsters don't want the old fear-fogies to succeed, and they undermine the trio at every turn. 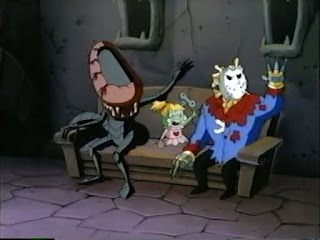 The problem with the film is that it tries too hard to hold onto the comedy-image of the monsters from various "cute monster" schticks-- not least being, of course, Bobby Pickett's "Monster Mash" song, which is played once too often in the movie. The silliness is so pervasive that even very young viewers probably wouldn't believe that such goofuses were ever scary, even in black-and-white. Moreover, even as comedy conceptions, these versions of Dracula, Wolf Man and Monster are thoroughly routine in conception, lacking even the relative inventiveness of, say, THE MUNSTERS. Ironically, the writers actually show more inventiveness with the "modern monsters." One of these is just a clone of "The Alien," but the second one, "Chicky," is a feminized take on "Chucky." For some reason this evil doll is armed with a channel-changer that can alter reality. I'm tempted to believe that the writers were really concentrating their animus against modern monsters against Freddy Kreuger, who of all monsters is best known for creating weird fantasy-worlds. The name of Freddy is recycled into the third modern monster, "Freddy Spaghetti," though he looks for the most part like Jason Voorhees. He's apparently made of spaghetti inside, which sounds a bit like a comedic version of a Clive Barker Cenobite-- and he's the source of the flick's only decent joke, involving the associations of Italian seasonings and how vampires don't like one particular spice.

There's a sort of confrontation of old and new monsters at the climax, but it's not a "combat" as such, just a bunch of comical reversals. (Wolf, acting like the lupine from "the Three Little Pigs," unleashes a huge wind that blows "Chicky" away.)

Posted by Gene Phillips at 4:06 PM
Email ThisBlogThis!Share to TwitterShare to FacebookShare to Pinterest
Labels: the marvelous