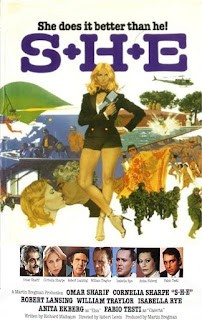 The original Bond craze insured that the 1960s were replete with dozens of acronym-agencies, most of which were thoroughly, gloriously absurd. Hollywood films pretty much got away from nutty abbreviations, except in explicit comedies. However, occasionally TV productions went back to that particular well.

For a TV-movie pilot that never became a series, S*H*E* isn't half bad. The "security hazards expert" of the title is essayed by Cornelia Sharpe, who in 1980 had racked only a smattering of roles in Hollywood flicks like SERPICO. Sharpe never became even a well-recognized jobbing actress, but her performance here, as glamorous secret agent Lavinia Kean, might've boosted her career had a series come to pass. I'm not saying she re-invents any wheels, but Kean has a little more depth than the standard secret agent. For one thing, when she's assigned to vamp villain Omar Sharif to learn about his insidious plan to destroy American oil reserves-- yes, the memory of the Oil Crisis was still fresh in 1980-- she does fall for the "bad boy" a little bit.

The script is by Richard Maibum, who as of this writing worked on an even dozen Bond-movie scripts, and thus some of the character's insouciance probably stems from his work. Admittedly, it's "spies-on-a-budget," with only limited location work. However, there are some pleasantly familiar faces in the cast besides Sharif, such as Robert Lansing, Anita Ekberg, and Fabio Testi. In addition to the SF-influenced plot of the bad guys, which involves a plot to contaminate petroleum, there's also a weird robot insect that one of the bad guys uses against Lavinia (I forget why).

Lavinia Kean has a few fight-scenes, adequately if unspectacularly orchestrated. Director Robert Michael Lewis helmed tons of TV-projects, though the only one I particularly liked was "The Nature of Evil," a better than average episode of KUNG FU, reviewed here. 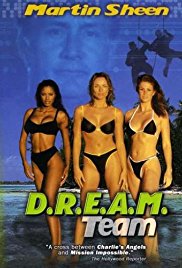 In contrast, following its movie-style pilot, THE D.R.E.A.M.TEAM became a series, although it only lasted five episodes despite the stunt-casting of Roger Moore in a minor mentor-style role (more or less taking the place of top-billed Martin Sheen from the telefilm). I dimly remember seeing the five episodes but would guess that none of them had metaphenomenal content.

However, the pilot film does fall into the domain of the uncanny, thanks to its villain Oliver Maxwell (Ian MacShane). Maxwell isn't nearly as ambitious as the Omar Sharif character from S*H*E*; his main evil scheme is to unleash anthrax germs upon the U.S. He has the requisite island-HQ favored by villains operating out of the Caribbean, including some automatically-controlled machine guns (they get their best scene killing off Paul L. Smith, a.k.a. "Bluto" in 1980's POPEYE.)

The three female stars are unabashedly gorgeous, but they're all one-note characters, not even as developed (in the characterization sense, that is) as the feminine stars of the then-still-current BAYWATCH. In the pilot at least, only Kaake and Everhart show any real fighting-prowess, and the climax pits Kaake against MacShane while Everhart gets to take on none other than former porn-star Traci Lords. Star-spotting aside, the only dream fulfilled by this team is one of unstinting mediocrity.

Posted by Gene Phillips at 2:38 PM
Email ThisBlogThis!Share to TwitterShare to FacebookShare to Pinterest
Labels: combative adventures, diabolical devices (u), the marvelous, the uncanny