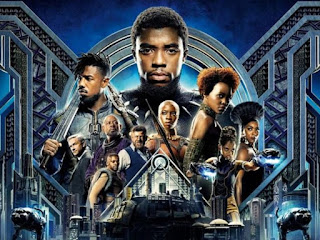 
I chose the swiped image above for very particular reasons. to wit: BLACK PANTHER is a movie in which the starring character is overwhelmed by his supporting cast. Yes, the photo-montage is trying to suggest that the cast is literally supporting Chadwick Boseman's King T'Challa, a.k.a. the Black Panther. But I think that a truer picture would be one in which the support-characters were all really big, and Boseman's Panther was being pushed up so high that no one could see him.

It certainly didn't have to be this way. The film that introduced the MCU Black Panther, 2016's CAPTAIN AMERICA; CIVIL WAR, had its share of problems, but I called the Panther's debut "exemplary." Although he's given a single motivation for most of the film-- that of revenge upon the killer of his father-- the script emphasizes the Panther's power and tenacity beyond his athleticism and his cool super-suit, and Boseman's performance consistently delivers everything the script requires, and more. The feat is even more impressive when one considers that there are over a dozen other superheroes in the film, competing for the viewer's attention.

There's almost no trace of that formidable figure in PANTHER. The character still wins most, though not all, of his fights, but he's sidelined by virtue of the filmmaker's decision to emphasize the hero's culture and family rather than the hero. The land of Wakanda follows a rich tradition from fantasy-fiction: that of the hidden, hyper-advanced civilization concealed from the eyes of modern-day nations. Like many such pocket super-dominions, this one is justified by a science-fictional "one gimme." Long ago a meteor chock full of the unique metal "vibranium" crashed in Africa, and  because of this, five native tribes came together, formed the nation of Wakanda, and concealed their super-science from the rest of the world.

Ryan Coogler's images of Wakanda are no better than the most mundane National Geographic pictorials, except that, incredibly, hardly any African animals appear in them. Yet I can't entirely fault the film's depiction of the support-cast. It's rare to see a superhero with a mother (Angela Bassett) and a sister (Letitia Wright), and these family-oriented scenes are some of the strongest in the film. Since this superhero is also a reigning monarch-- placed on the throne by the aforementioned murder of his father-- he also has a couple of advisers (one of whom conceals a secret important to the plot, while the other becomes implicated in the schemes of the main villain). But on top of that, the king also has an "honor guard" consisting of a gang of spear-wielding women (based on a conceit from the 1990s PANTHER comic), and two of these characters also burn up a lot of time, particularly one who used to be T'Challa's lover. (I have the sense that "girl power" was a lot more on the filmmakers' minds than "black power.")

On top of that, the film also has two villains and one potential-villain-who-becomes-an-ally. Just as a lot of earlier superhero movies suffered from an overabundance of opponents, too many villains means not enough emphasis on the hero.

The script tries, without much success, to meld two important narratives from the Marvel hero's backstory. The first is the character's origin from FANTASTIC FOUR #52-53 (1966), in which it's revealed that when T'Challa was a child in a still-savage Wakanda, a European expedition, led by the evil Klaw, invaded the country for its vibranium and killed T'Challa's father. Since this conflicted with the CIVIL WAR plotline, PANTHER assetts that Klaw (renamed Klaue) still invaded the country long before T'Challa's reign but this time he killed the father of W'Kabi, one of the advisers.

The second narrative was the early 1970s sequence "Panther's Rage," one story of which I reviewed here.  This sequence introduced a villain named Killmonger, who took advantage of the Panther's absence from Wakanda to try to seize power by force. The film makes Klaw/Klaue a side-villain and Killmonger the main one, while another comic-book foe, M'Baku of the White Gorilla tribe, is given more ambivalent status.

"Panther's Rage," whatever its faults, focused on a clear arc of the hero's self-doubt once he's found that his policies have had severe consequences for his people. The movie's script, co-written by Coogler, throws in a meager "crisis of faith" for T'Challa when he finds out that his father had some skeletons in his closet, but the skeletons, to mix metaphors, fail to "come alive." Because the hero's emotional arc is so poorly defined, the key scene of T'Challa's initial defeat by Killmonger-- a trope also borrowed from "Panther's Rage"-- is rendered hollow. Later, T'Challa recovers and reverses his fortunes, but the script emphasizes the help he receives from his family-- and even former enemy M'Baku-- rather than his own concerted efforts.

Killmonger is yet another example of a botched MCU villain. Like the character of Zemo in CIVIL WAR,. Killmonger is a "stealth villain," hiding in plain sight and emerging as the main adversary only in the film's latter half. I didn't like it with Zemo and like it even less with Killmonger. He is, however, the focus of the film's sociopolitical mythology. I wrote this commentary on a forum today, and it sums up his status (SPOILERS ahead):

...Killmonger is also using the same methods that were used against third-world nations to supposedly improve their lot. There's much made of the fact that he's a rogue CIA guy; that his method of attacking Wakanda during a transition-period is SOP for the CIA. If you believe that the CIA's governmental meddling is immoral when it's directed against third-world nations, then such meddling doesn't magically become moral because it's supposedly going to work to the benefit of People of Color. Ironically, Killmonger is treating Wakanda just like any white CIA spook treats a third-world country in the real world: as a means to an end. I would have liked to see someone in the film point out that Killmonger was duplicating the methods of the "colonizers;" it would have been enough for one of the Wakandans to call him a "colonizer," the same insult that Shuri casually directs against Ross. It also would've been nice to point out that Killmonger's actions would have huge blowback for Wakanda, and that, if the "war dogs" failed to conquer all-- a decisive possibility in a world with superheroes, though the film tries to put that aside-- then Wakanda would be in deep shit. I did like the fact that Killmonger's shown to be blithely uninterested in Wakanda's culture and people; he's an "Ugly American" who just happens to be black.


Given the over-politicization of modern "race films," PANTHER should be given a little credit for acknowledging that the agenda of an "angry black American" might not always be the best one for Africans. Further, though I don't appreciate the way the MCU skimps on the wondrous aspects of fantasy-worlds like Asgard and Wakanda, at least the anti-munitions theme, seen to such good effect in WINTER SOLDIER, remains both consistent and evocative.


Posted by Gene Phillips at 3:03 PM
Email ThisBlogThis!Share to TwitterShare to FacebookShare to Pinterest
Labels: combative adventures, the marvelous