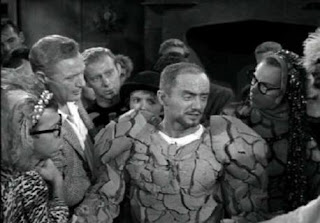 When writer Lou Rusoff wrote GHOST OF DRAGSTRIP HOLLOW-- a loose sequel to his HOT ROD GANG, a juvenile-delinquency film with some of the same characters--- he was conceptually a long way from the serious 1950s SF-films for which he's best known today, such as THE SHE CREATURE and DAY THE WORLD ENDED. Instead, DRAGSTRIP appears to be the immediate ancestor of the AIP "Beach Party" films-- not least because Rusoff is credited with the first film in that series, released in 1963, the year of his passing. Strangely though, BEACH PARTY is a good deal more sober than DRAGSTRIP, which resembles the later, loonier films in the AIP series.

One interesting aspect of DRAGSTRIP is that while a lot of films about drag-racing adolescents focused on an ensemble of misunderstood teens, top-billed Jody Fair (repeating her "Lois" character from HOT ROD GANG) is the center of the action here. The boyfriend she had in the earlier film disappears, replaced by a thoroughly forgettable new swain. Lois is seen at the film's opening, drag-racing against her feminine rival from another car club. When a journalist interviews the "clean teens" in her car club, there's a certain amount of badinage with the ensemble-characters, particularly a goofy teen genius and his statuesque female companion. But Lois is the only character seen with a home life, justifying her fast-car fancies to her skeptical father and sympathetic mother. She talks her father into hosting a dance-cum-slumber party, allowing for a little bit of innocent rocking and canoodling. Although all of the teens are pretty square, the journalist portentously asserts that they have a reason to live life in the fast lane: because they're the first generation to live in the shadow of armageddon, or something like that. (Perhaps that line was Rusoff recycling sentiments from DAY THE WORLD ENDED.)

The teens' biggest problem isn't tyrannical adults, but the teenagers' second most common complaint: lack of funds. They're kicked out of their garage for non-payment of rent, but fortune favors them: Lois's oddball aunt Anastasia (Dorothy Neumann, another HOT CAR GANG alumnus) lets them hang out in her spare house. The only catch-- aside from the fact that Anastasia goes along, accompanied by a parrot that talks like a human being-- is that the joint is haunted. As it turns out, DRAGSTRIP is one of the relatively rare films in which there's both a real ghost and a fake ghost. And as if Rusoff's fount of silliness were overflowing, he even has the super-genius kid invent a talking car-- perhaps tapping into the 'transcendental state of locomotion" or whatever he says-- though almost all the car does is to argue with the parrot.

Though the story's too all-over-the-place to justify even a 'fair" rating for mythicity, it's also, like the "Beach Parties," immensely likable in its heartfelt corniness.

Posted by Gene Phillips at 3:06 PM
Email ThisBlogThis!Share to TwitterShare to FacebookShare to Pinterest
Labels: the marvelous