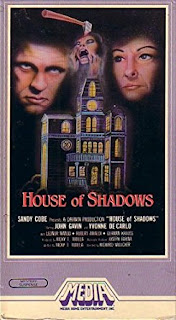 About the only thing interesting to me about this low-budget Argentinian ghost story is that its focal character is not the ghost--as is the case in 1972's THE OVAL PORTRAIT, which was written by HOUSE's scripter, Enrique Tudela. In that film, the ghost was benign while a madman caused trouble for innocents, and so it seems that Tudela mines the same basic idea here, since the focal character is a madwoman who commits several murders trying to cover up her crime, that of killing the person who became the ghost. In keeping with my spoilers, I'll just give the killer away right off: it's one of the film's two American actors, Yvonne DeCarlo, the other being John Gavin of PSYCHO fame.

In contrast to OVAL PORTRAIT, and to a lot of Ms. DeCarlo's films of the 1970s and 1980s (see PLAY DEAD, for one), HOUSE has a little potential. It takes place during the early 1900s, and the dubbed version of HOUSE broadly implies that the location is somewhere in America, since all of the surnames are English-derived, like Howard, Webster, et al. The viewpoint character is a twenty-something woman, Audrey, who became a live-in servant to the wealthy Mrs. Howard (DeCarlo) after the childless Mrs. Howard located Audrey through a placement service connected with an orphanage. Beyond the fact that Audrey is an orphan, she seems content enough performing odd jobs for the old lady. One night, she walks Mrs. Howard's dog, and ends up chasing the dog into an abandoned mansion. In the mansion Audrey sees a woman shot to death by an unseen assailant. She reports the matter to the cops, only to learn that there's no corpse in the mansion. However, there was a famous, near-identical murder committed at the locale over twenty years ago.

The murder-victim was a woman named Catherine, who's played in the movie by the same actress playing Audrey-- and soon Audrey, though not literally possessed by Catherine, finds herself fascinated with the story behind Catherine's murder. For one thing, Catherine was pregnant when she was slain, and presumably the child died as a result, too, though the dubbed version does not say so. Tudela might have thrown in some metaphysical mystery by wondering if Little Orphan Audrey was somehow a reincarnation of either Catherine or her child. Certainly using the same actress for both the murder-victim and the investigator seems to lead in that direction, but that potential goes unused.

Audrey's investigation results in a lot of people being murdered by an unseen killer. There's no knowing why the killer doesn't just knock off Audrey immediately, since she has no protector-- not even the local cop who helps her a little-- and has no self-defense capabilities. Of course, without a string of killings, the story would have no motive force.

Gavin, playing one of Catherine's suitors, seems mildly interested in courting Audrey, though no one remarks on any actual resemblance between the modern girl and the murdered woman. This too is not explored. All of the actors, even the Americans, are badly dubbed. Given the distinctive character of DeCarlo's voice, this takes away a lot of her star appeal. On top of this, she gives what must be the most low-key performance of her career, at least until she stands revealed as the mystery killer.

Given that there are probably hundreds of South American filmmakers whose works are never made available to English-speaking viewers, it's odd to think that a hack like Enrique Tudela is relatively available through this film, THE OVAL PORTRAIT, and TERROR IN THE JUNGLE.