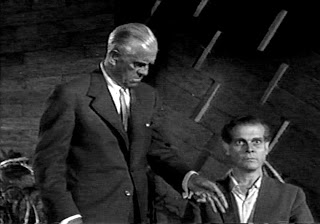 Forties-style horror films had fallen on hard times in the early 1950s, with the effect that some actors who had been horror-headliners in the 1940s were relegated largely to support-character status. as both Boris Karloff and Lon Chaney Jr were in 1952's THE BLACK CASTLE. By the late 1950s, though, studios began to make very tentative steps toward old-style horror again.

VOODOO ISLAND is, frankly, largely a misstep. Director Reginald LeBorg had proven an efficient if unremarkable journeyman at 1940s Universal, but ISLAND is hugely handicapped by a vacillating script by Richard Landau. Landau's most stellar credit prior to this film is 1955's QUATERMASS XPERIMENT, though he was merely adapting Nigel Kneale's teleplay. Oddly, LeBorg and Landau had crossed paths at least one earlier time, in a 1946 adaptation of the LITTLE IODINE comic strip.

ISLAND seems very much like a "deal movie." The producers signed Karloff to a two-picture deal, and arranged to shoot the film on one of the Hawaiian Islands-- and the script was thrown together to combine those elements. Karloff plays Philip Knight, a professional debunker of supernatural phenomena. A rich man, planning to develop an island in the South Paciic, hires Knight to investigate what seems like a "voodoo" phenomenon: a surveyor who returned from the island in a deep trace-like state. Apparently Landau or someone above him thought that "voodoo" could be applied to the magical systems of just about any tribal people, since voodoo proper is associated more with the Atlantic than the Pacific.

Knight is a bit of a martinet, accompanied by Sarah Adams, a nubile young aide whom the older man persists in addressing by her last name. They and some other employees of the rich guy-- one of whom is apparent lesbian architect Clair (Jean Engstrom)-- charter a boat to the island in question from a fellow with the suggestive name of "Gunn." They even take the entranced surveyor with them, which certainly doesn't seem especially kosher in terms of the man's civil rights.

The boat breaks down near the island-- apparently for supernatural reasons-- so that the voyagers have no choice but to go tramp, tramp, tramping through the Hawaiian foliage. That's what they were going to do anyway, in order to solve the big mystery, but I suppose the crippled boat lends a jot more suspense to the endeavor. The explorers don't see any of the natives discussed earlier, but they do find some very unconvincing "monster plants," whose existence on "Voodoo Island" goes utterly unexplained. Possibly the producers thought that an old-fashioned "voodoo curse" movie might not be able to compete alongside the burgeoning genre of SF-films, and so threw in the killer plants to provide a SF-like monster.

Landau's script attempts to spice up the tiresome trek by having both Claire and Gunn pay court to the virginal Ms. Adams. Of course there's not a lot of suspense, not only because no commercial film in 1957 would portray a consensual lesbian affair, but because the script allows for no more than coy suggestions of Claire's pursuit. Gunn and Adams do become a couple, but not a very interesting one, though she listens with fascination to the story of his Big Reason for bumming around the Pacific. It's hard to say if Claire's fate-- being killed by a piece of killer kelp-- is meant to express disapproval for her sapphism, but it's hard to be moved by her death either way. 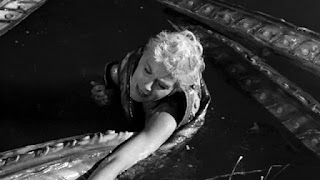 Finally, the explorers are captured by the local natives, and Knight is finally convinced that voodoo magic is real. He swears to the natives that he'll keep the developers away, and although they have no real reason to believe him or any of the others, the natives spare the group-- mostly. One employee defies the natives-- apparently not even believing in their spears any more than their magic-- and he suffers death by voodoo, apparently as a belated object lesson. Knight and the survivors all go back home, and presumably the natives keep their island. 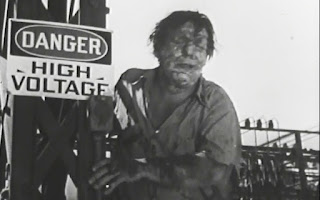 INDESTRUCTIBLE MAN, made the previous year, features Lon Chaney Jr. in one of the few featured roles of his later years. It seems loosely derived from the idea of 1941's MAN MADE MONSTER, at least insofar as enhancing Chaney's large stature with science-fictional powers. However, next to VOODOO ISLAND, INDESTRUCTIBLE is at least a passable formula-flick.

This time the narrative is driven by revenge. Chaney plays "Butcher" Benton, on death row for murder after taking part in a heist. In an early conversation between Benton and his mouthpiece  Lowe, it's established that Lowe plotted the heist, and that when Benton tried to take the loot for himself, Benton's two partners-in-crime turned state's evidence on Benton for the act of murder. However, Benton hid the money from all three of his partners, and he swears that he'll come back from the grave to kill Lowe and the other two.

After Benton's execution, Lowe seeks out the only person known to be friendly with the murderer: a showgirl named Eva. Lowe manages to swipe a clue that would have sent her to the hidden cache of cash, seconds before police lieutenant Chasen, also looking for the missing money, shows up on Eva's doorstep. However, unlike Lowe Chasen becomes much more interested in the showgirl than the dough. The script, by a male-and-female team that didn't write too much else for Hollywood, proves adept in finding reasons to keep Eva "respectable." She explains to Chasen that she only dances in a burlesque show because she really likes performing, but that she's a small-town girl at heart. In addition, she wasn't really the Butcher's girlfriend. She merely roomed with the gangster's old flame, who then threw Benton over, and then found herself receiving Benton's attentions for having showed him a little sympathy.

Benton's empty threat of revenge is brought to fruition when a couple of scientists pay a mortuary attendant to get hold of a dead body for experimentation. Said experiment not only brings Benton back to life-- albeit with no voice-- it condenses his cellular matter so that he's invulnerable to a number of phenomena, ranging from syringes to bullets. Benton immediately expresses his gratitude by killing both scientists and hunting down his enemies. Chasen soon finds out about the invulnerable killer. Despite the lieutenant's difficulties in convincing his superiors to look for a man come back from the dead, eventually the police mount a manhunt for Benton. The Butcher conveniently succeeds in slaying the other crooks before the cops prove that the Indestructible Man isn't quite invulnerable to heavy ordinance.

This was one of just three films directed by Jack Pollexfen, best known as a writer for the well-regarded MAN FROM PLANET X as well as misfires like THE NEANDERTHAL MAN (both reviewed here). Pollexfen and cinematographer John Russell, who collaborated on PLANET X and two other films, do a fine job of combining Chaney's science-fictional menace with the genre of the "police procedural," even managing to make the voice-overs interesting. It's no THEM!, but INDESTRUCTIBLE MAN is a solid B-film in terms of acting, script and photography.