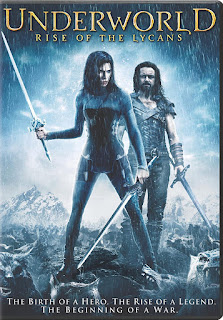 
RISE OF THE LYCANS is the prequel to the two UNDERWORLD films starring Kate Beckinsale. Beckinsale's character Selene makes only a cameo appearance here, as RISE is basically a history lesson that sets up many of the long-lived characters whom Selene meets in her films, both set in the 20th century. Aside from the cameo, the rest of the film takes place in 13th-century Hungary, when the long-standing feud between vampires and werewolves (or "Lycans") takes a unique turn.

One is that for the first time werewolves begin to assume an intelligence equal to that of the more urbane vampires. Prior to that, werewolves are mere beasts in human form, whom the vampires can easily control by using their bane, silver, against them. This setup is RISE's best aspect, for though in real folklore vampires and werewolves have no real interaction, in popular culture vampires were usually pictured as the masters of both real wolves and wolf-people, at least as early as Stoker's DRACULA.

The script is co-written in part by Len Wiseman and Danny McBride, who had worked together on the previous films as well, though RISE boasts a new director, Patrick Tatapoulous. The change doesn't make a lot of difference, for like the previous films RISE is pretty short on genuine drama and long on ass-kicking action, though none of the action-scenes stack up to the best from UNDERWORLD EVOLUTION.

The aforesaid "unique turn" is that a particular Lycan, Lucian (Michael Sheen, seen as a villain in the Selene saga), is one of several who evolve intelligence. He works under the thrall of vampire lord Viktor as a house-slave, but he strays above his station when he falls in love with Viktor's willful daughter Sonja (Rhona Mitra). Their "Romeo and Juliet" arc is adequately if unexceptionally handled. but the emphasis is on Lucian as a Spartacus to his people, leading them to escape the dominion of the bloodsuckers and to form their own long-lived clan, thus resulting in the feud that lasts until the 20th century.

As with the first two films, there's so much emphasis on the two monster-clans that the existence of regular human beings is barely acknowledged. However, because of the more limited nature of the conflict, RISE doesn't suffer from nearly as much, "Now who the heck is THIS overbearing overlord--?"
Posted by Gene Phillips at 3:25 PM
Email ThisBlogThis!Share to TwitterShare to FacebookShare to Pinterest
Labels: combative adventures, the marvelous