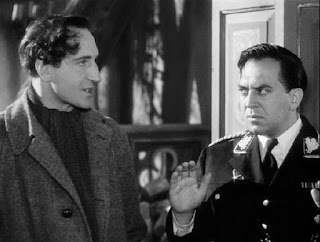 Universal's acquisition of the Rathbone-Bruce team for a new contemporary series of Sherlock Holmes adventures immediately drafted the duo to oppose the Nazi menace. In fact, the first three Universal films, airing from late 1942 to early 1943, are all WWII morale-boosters. VOICE OF TERROR was first, followed by the best of the three, SHERLOCK HOLMES AND THE SECRET WEAPON, and ending with SHERLOCK HOLMES IN WASHINGTON. Only with SHERLOCK HOLMES FACES DEATH (September 1943) did Universal put the morale-boosting aside and start emphasizing pure mystery.

VOICE OF TERROR takes its cue from Arthur Conan Doyle's 1917 "His Last Bow." This story was also a morale-booster, in which Doyle introduced an aged but still vital Holmes, capable of performing World War One espionage services for Old Blighty. However, VOICE is primarily concerned with Holmes and Watson ferreting out the titular menace. The "Voice of Terror" is a Nazi radio broadcaster who bedevils the English populace with messages of imminent doom, like the real-world "Lord Haw Haw." Unlike the real-world version, the Voice also co-ordinates some if not all of Germany's sabotage operations-- which is not enough to make him a super-villain, any more than two other cinematic "Voices" that I critiqued here. It turns out that although the Voice poses as an Englishman, he's not any more English than his real-world model. The sound of the villain's speaking-voice generates a certain amount of menace, but the Voice of Terror himself does not stand up to later Holmes-opponents, like the Spider Woman and the Creeper.

In the film's best scene, Holmes and a female aide named Kitty (Evelyn Ankers) enter a pub filled with hardcore criminals, many of whom have personal grudges against the detective. Holmes needs info from the crooks for his investigation, but Kitty, rather than Holmes, is the one who convinces the hoods to render their services with a stirring plea to their common cultural heritage. 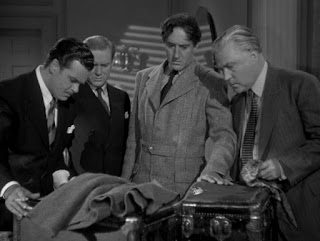 SHERLOCK HOLMES IN WASHINGTON sends Holmes and Watson to America to solve the mystery of a missing Englishman named Pettibone/. The Englishman turns out to be a courier with a microfilm that the Germans want very badly. Pettibone manages to conceal the microfilm before he's killed, and Holmes must find the document before the German spies do. However, Sherlock is at least partly hampered by his apparent celebrity-- presumably through the medium of Watson's published stories-- and the Germans seem to know about Holmes' movements as soon as he arrives in Washington to contact American intelligence. In the screencap shown above, Holmes, Watson and the American agents receive a very small container. In the movie's only nod to the macabre, it turns out that Pettibone-- or at least part of him-- is inside the container.

The film features a number of stirring paeans to democracy, intoned in the approved Basil Rathbone style, and some of Holmes' best cinematic detective-work. Bruce also contributes some funny scenes when he's seen reading "Flash Gordon" in the American papers. But the best scenes are those in which Holmes faces the leader of the German spy ring, played by George Zucco, who had previously squared off against the detective in THE ADVENTURES OF SHERLOCK HOMES.  Zucco's quiet menace matches Rathbone's  brittle aggression. However, at one point the script seems more than a little confused. Said script has Zucco's character protests his innocence of espionage, and simultaneously seems to know a lot more than an ordinary person ought to know about the English sleuth.

Posted by Gene Phillips at 2:07 PM
Email ThisBlogThis!Share to TwitterShare to FacebookShare to Pinterest
Labels: the naturalistic