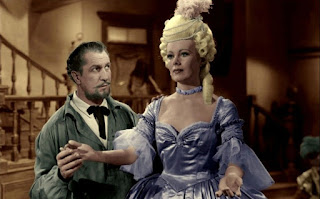 
I confess that I haven't watched MYSTERY OF THE WAX MUSEUM for some time, but it seems to me that scripter Crane Wilbur and director Andre de Toth revamped the 1932 film substantially, albeit more in terms of style than content. For instance, the plot is essentially the same, aside from eliding all the newspaper-investigator characters (or replacing them with unusually competent cops). But I'd be surprised if there's anywhere in MYSTERY that the crazy waxmaker speaks a line like this one:

"There is a pain beyond pain, an agony so intense it shocks the mind into insane beauty."

It's a fine line, since it encapsulates the script's fascination with the double-sided nature of human entertainment: craving both the serenity of beauty and the kinetic impact of "shocks."

HOUSE begins with an immediate opposition of the two tendencies. In turn-of-the-century New York, sculptor Henry Jarrod (Vincent Price) maintains a wax museum devoted to the theme of beautiful historical figures like Joan of Arc and Marie Antoinette, with only one or two concessions to what Jarrod calls "the macabre," like a wax replica of John Wilkes Boothe. He lives a monastic existence, thoroughly absorbed in his art, but to launch his museum he was obliged to become partners with a crass investor, Burke. The latter wants Jarrod to devote the museum to "shocks" in order to bring in more customers. Jarrod refuses, and though he offers Burke the chance to recoup his investment, the impatient investor suggests that they could both recoup their expenses by burning down the museum for the insurance. Jarrod refuses, since his sculptures are like his children to him.

This opening is easily the weakest part of the film. When Burke first appears at the museum, his dialogue makes it clear that he knows how besotted Jarrod is with his creations. So why does he advance the possibility of burning down the museum so blithely? And when he gets into a fight with Jarrod, he immediately starts setting fire to everything, forgetting that he can't claim the insurance if Jarrod testifies against Burke. When Burke knocks Jarrod down so that he's trapped by the fire, it almost seems an afterthought rather than a deliberate attempt at murder.

Ten years pass, during which Burke collects his insurance and Jarrod is believed dead. But Jarrod, though disfigured, has merely been biding his time, gathering assistants and constructing a new wax museum. But because Jarrod is too afflicted to sculpt statues any more, he saves time by finding human bodies-- some of whom, like Burke, he himself kills-- and encasing them in wax for his museum. One of his victims is also Burke's girlfriend, but the woman's best friend Sue becomes Jarrod's next target when he conceives that she's perfect to be his new Marie Antoinette.

There's never any real mystery as to what Jarrod is doing, in part because in place of the 1932 film's atmospheric mood, HOUSE is full of brilliant color and blatant, literally "in your face" imagery, designed to take advantage of the 3-D craze. Though the mad sculptor is devoted to his classical image of beauty-- even if it's supplemented by real dead bodies-- the film is aesthetically aligned to the aesthetic of the villainous Burke; that of giving viewers constant shocks. For later viewers, one shock not intended by the filmmakers is that of seeing an up-and-coming Charles Buchinsky-- later Bronson-- playing a deaf-mute with the Frankensteinian name of Igor.

In addition to many interesting ruminations about the nature of art and beauty, HOUSE also probably boasts the greatest number of fistfights ever seen in a horror-film up to that time. The end sequence is violent enough to rate as a combative drama. 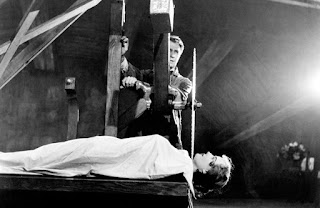 THE MAD MAGICIAN was apparently rushed into production by the studio, since it's both black-and-white and repeats many of the tropes from HOUSE.

This time the director's chair is occupied by John Brahm, but there's nothing in MAGICIAN that's as moving as his earlier work on THE LODGER and HANGOVER SQUARE, and he even burns up a certain amount of screen-time having the villain dispose of a body as Laird Cregar did in HANGOVER. Crane Wilbur's script is far weaker than HOUSE, except that, oddly enough, MAGICIAN has a much stronger opening.

This time, Price plays Gallico, a magician manque. He's been a maker of magicians' illusion-props for years, under the thumb of his capitalistic boss Ormond, but he's finally designed some tricks that he hopes will propel him into the big time. Price's performance in the film's first hour is actually more impressive than anything he does in HOUSE, for he successfully puts across the image of Gallico as a genius crippled by his lack of self-confidence. He's also even more put-upon than Jarrod, for before he can perform his new tricks on stage, Ormond legally blocks the performance, claiming that everything Gallico makes is legally Ormond's property. Oh, and for good measure Ormond has in past stolen Gallico's spendthrift wife (Eva Gabor), so that Ormond is the very picture of a pernicious profiteer.

As in HOUSE, the madman's first victim is the money-man, and it's Ormond's head that complicates things for Gallico after getting separated from its body. However, once Gallico goes mad the script loses all interest in his psychology. There's one moment in which Gallico seems overly fascinated with a young female model, who plays the role of the Sue-character in HOUSE, but he's far less interested in women-- even the ex-wife he murders-- than in displaying his talent. But his magicians' tricks aren't nearly as resonant as the wax statues of Jarrod, and so the film winds down to a conclusion that's less than "magical" (and certainly not combative, either).

Posted by Gene Phillips at 4:20 PM
Email ThisBlogThis!Share to TwitterShare to FacebookShare to Pinterest
Labels: bizarre crimes (u), combative dramas, diabolical devices (u), outre outfits (u), perilous psychos (u), the uncanny