I made various disparaging remarks on Ang Lee's HULK during my review of the 2008 INCREDIBLE HULK, but I've never written a full review of Lee's film.

At the time of the film's premiere, I had high hopes for the adaptation. Lee was best known for intense dramatic movies like 1993's THE WEDDING BANQUET and 1997's THE ICE STORM, but he'd proved that he could handle intense action as well, in his adaptation of the martial-arts novel CROUCHING TIGER, HIDDEN DRAGON. Unfortunately, though Lee claimed that he paid a lot of attention to translating the language of comic books into film, he never quite gets a handle of translating the way superhero characters work.

To be fair, the original five issues of THE INCREDIBLE HULK are all over the place, and it seemed as if creators Lee and Kirby couldn't quite figure out what to do with their Green Goliath. That said, the origin does create an empathetic comics-character in Bruce Banner. He's Every-Wimp, a spindly little guy who, possibly like Kirby himself, always got picked on by bigger men. 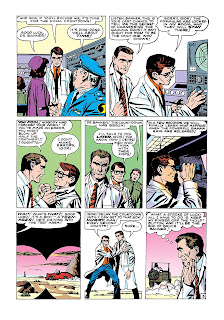 Yet he's also valuable to the American war effort, so his genius allows him great repute-- except that his own Gamma Bomb unleashes the "Mister Hyde" demons inside him. It's a simple, elegant origin, and despite a rocky beginning, the character's second outing in Marvel's TALES TO ASTONISH-- given greater dramatic treatment by Stan Lee and Steve Ditko-- caught fire, and so the Hulk's never been cancelled again in any meaningful way.

Lee was certainly justified in not reproducing the Cold War aspects of the Hulk's first origin, and the script's idea of using "nanomeks" to heal trauma is a more viable concept that the TV-show's "tapping into strengths we all possess" schtick. The problem, though, is that for the first half of HULK, Lee spends a lot of time providing a dual origin for the Hulk-- he's exposed to gamma radiation, but he already has nanomeks in his body thanks to a crazy evil father. Yet the script fails to make Banner an empathetic character. The overriding conceit is that Banner is a trauma survivor-- the crazy father also tried to murder him as a child, only to kill Banner's mother-- and this has made him repressed and emotionally distant. (It's suggested that his emotional remoteness is why ex-girlfriend Betty Ross was attracted to him, with an intimation that it's a response to her being raised by a hardcore Army officer, General Ross.) In addition, the script also inserts a secondary villain, Talbot, as an obsessed ex-soldier out to monetize Banner's discovery. Ross and Talbot follow the model of similar "blocking characters" as they are found in the man-into-monster films of the 1950s, such as THE AMAZING COLOSSAL MAN, that influenced the original comic book.

Main villain David Banner (winsomely named for the TV character) is not much better developed, though actor Nick Nolte gives a bravura performance anyway. The persona of the comics-character The Absorbing Man is clumsily grafted onto that of the Heavy Father, but the climax, in which the Hulk battles his father to the death, is curiously underwhelming, partly due to the dodgy level of CGI effects. Even less appealing is an early scene in which the Hulk must save Betty from a pack of gamma-mutated dogs, one of which is a poodle.

Though Lee fails to capture the Banner character, he does at times communicate the appeal of the Hulk. The film's best scenes are those when the monster escapes the Army's prison and flees into the desert. Though this Hulk has nothing in common with the atomic experiments in White Sands, seeing him vaulting across barren sands and rocky escarpments still creates an archetypal frisson-- not least in the scenes where the Hulk tears apart an attack-force of tanks--

Just like in the funnybooks.
Posted by Gene Phillips at 3:14 PM
Email ThisBlogThis!Share to TwitterShare to FacebookShare to Pinterest
Labels: combative adventures, the marvelous