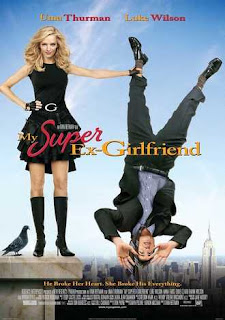 Are required this time, because I;m disclosing the plots of both a 2006 movie and an earlier film on which MY SUPER EX-GIRLFRIEND seems to have patterned itself.

As many others have said, there’s nothing new about movies swiping from other movies, as per the saying that “imitation is the sincerest form of Hollywood.” There are any number of “shark” or “ark” movies that make no bones about their derivative nature. In this case, though, it’s not impossible that the patterning was wholly intentional.

Likeable schmuck Matt dates Jenny, a moody beauty. Matt has two work-friends: a male goofball who approves of the liaison, and a female buddy, Hannah, who seems less than pleased. Little do any of them know that Jenny is actually the secret ID of the superheroine “G-Girl.” Matt soon finds out not only her identity, but also that she’s clingy and prone to violent outbursts. When Hannah breaks up with her boyfriend, she and Matt end up sleeping together. Having fallen in love with Hannah, Matt breaks up with Jenny, and she uses her super-powers to take acts of petty vengeance against him.  Professor Bedlam, G-Girl’s resident super-villain, approaches Matt with a solution: to drain her powers with a meteor-fragment like the one that empowered her. Matt and Bedlam trap the erratic superheroine, but things go awry when some of G-Girl’s powers are drained into Hannah. The two super-women fight until Matt finally convinces G-Girl that Bedlam’s obsession with her is actually a measure of his devotion, at which point G-Girl pairs off with Bedlam and Matt remains with Hannah.

Now, a quick summation of the 2001comedy SAVING SILVERMAN:

Likable schmuck Darren, over the objections of his two goofball buddies J.D. and Wayne, becomes engaged to Judith, a “mean girl” psychologist who patently means to separate Darren from his old life. It's also apparent that she doesn;t really love Darren; she just likes controlling him. After the two goons are unable to block the impending marriage by appealing to Darren's better instincts-- particularly by setting him up with old girlfriend Sandy-- the duo kidnaps and imprisons Judith. Judith, a skilled martial artist, eventually breaks free of the goofballs and holds Darren to his commitment to marry her. But J.D. interrupts the wedding and throws himself on the "grenade" by telling Judith by telling her that the two of them belong together because they challenge one another. Judith releases Darren, allowing him to be paired with Sandy.

The common thread that may have led someone involved with SUPER to borrow from SILVERMAN is that both films concern powerful but bitchy women who impose themselves on nice guys and have to be diverted to other targets—i.e., not-so-nice guys—so that the nice guys can end up with nice girls. Of the two, SILVERMAN’s gender politics are at least sporadically funny, while SUPER just chalks up another epic fail for former GHOSTBUSTERS director Ivan Reitman.  Part of the reason is that while SILVERMAN speaks to a familiar malaise, in which marriage breaks up a gang of guy-friends, SUPER is an overly simple riff on superhero tropes, lacking any of the complexities seen in the roughly similar HANCOCK.

Even in terms of gender politics, the slob-comedy comes out better than the sprightly looking rom-com. Judith is innately a powerful woman, who, though inappropriately hooked up with a weaker man, doesn’t stop being powerful when J.D, persuades her that she needs a more challenging matchup. However, Jenny is essentially a nerd who has coolness thrust upon her, but remains a nerd at the core. Her origin explains that she and Bedlam were outcasts together at college. One night she was just on the edge of surrendering her virginity to him, when a meteor crashes to earth near them. Jenny’s exposure to the meteor’s radiation changed her into G-Girl, giving her the chance to play the savior of mankind but distancing her from her old almost-boyfriend. This twist on the Superman-Luthor dynamic has some potential, but it’s largely wasted, given that the film places more emphasis on the dull characters of Matt and Hannah. This too differs from SILVERMAN, which emphasizes the over-the-top absurdities of Judith and J.D.

SUPER isn’t entirely a waste of time. Jenny’s character is too one-note to give Uma Thurman anything to work with, but Eddie Izzard makes an urbane super-villain. Maybe the film resonates best with people who have had breakups with crazy exes, but I think that even they would find the film blandly derivative.

Posted by Gene Phillips at 2:19 PM
Email ThisBlogThis!Share to TwitterShare to FacebookShare to Pinterest
Labels: combative comedies, the marvelous