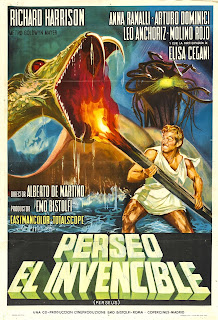 
This sword-and-sandal flick is best known in fan-circles by its risible American title, THE MEDUSA VS. THE SON OF HERCULES. The use of the “son of Hercules” tag was a marketing tool that often had nothing to do with the films placed under that rubric, and indeed the opening commentary establishes that sometimes these “sons” were merely figurative “relatives.” I’m reviewing the film under its Italian title because it deserves a little credit for making an attempt to adapt the Perseus myth of classic Greek mythology. That said, this film does to the Perseus narrative what THE MINOTAUR did to the mythos of Theseus: it puts the original through a sort of mythic mix-master.

The easiest way to approach the original is to boil it down to two essential plot-actions. In the first, Perseus must assert himself as the protector of his mother Danae against the lustful Polydectes, and to do that, he must conquer one monster, the Gorgon Medusa, and bring its head back to Polydectes. In the second, after slaying Medusa, Perseus encounters his future wife Andromeda, whom he rescues from a sea-monster. Curiously, as if the filmmakers wanted to “sell” the film on the strength of its monsters, both creatures-- creations of famed FX-maker Carlo Rambaldi-- are lumped together at the opening of PERSEUS. A particular part of Argos is inhabited by both a lake-dragon and a Medusa that looks like an ambulatory plant. The Medusa has tendrils rather than snakes-for-hair, and in place of a face, a single eye that can turn humans to stone. The propinquity of these creatures works out well for Acrisius, the king of Argos, because the monsters conveniently block any army that tries to attack Argos.

In the best known version of the myth, Acrisius is the grandfather of Perseus. Acrisius attempts to keep his daughter Danae from having any relations with men by imprisoning her in a high tower. She becomes pregnant by Perseus anyway, usually through the agency of the god Zeus, though one variant claims that she’s impregnated by her uncle Proetus, Acrisius’s rival for the throne.

In the film, Perseus’s father is a mortal who was murdered by Acrisius, who then married Danae, who was at the time of the marriage ignorant of Acrisius's crime. Perseus was also separated from both father and mother. At the time of the film's beginning, Danae is now aware of what her second husband did to her first one, and she curses both her husband and his grown son-by-another-wife Galenore (not in any version of the myth). She tells them that they will be punished when her son returns, and that they will know him by special birthmarks on his shoulders.

Thus, while in most myth-tales Perseus is inseparable from his mother, here the hero is reared apart from her, presumably by adoptive parents, in a neighboring realm over which Acrisius tyrannizes. The hero’s just a common worker—not in any way blessed with godly powers, or even a huge build. However, he’s attracted the attention of a local princess, Andromeda, who gets his attention by shooting an arrow at him. Perseus doesn’t initially intend to pursue the noblewoman, but he’s forced to compete for her hand when Galenore, who covets Andromeda, challenges the commoner to a duel. Perseus wins the duel but Galenore recognizes the commoner’s birthmarks and plots his demise.

Since the movie has already married Danae to Acrisius, there’s no need for a Polydectes. There is eventually a mother-son reunion scene. but as if to keep Danae from tying up any time Perseus might direct toward Andromeda, Danae is summarily killed by stepson Galenore. This leads Perseus, in roundabout fashion, to make a foray into the land haunted by the two monsters. Unlike the classical hero, Perseus gets no help from any gods or spirits, but uses his human skills and cleverness—again, looking into a reflective shield—in order to best the Medusa. Since it doesn’t have a head to cut off, Perseus resorts to the Cyclopean method of monster-slaying: stabbing the creature in its eye. After that the stone soldiers revive—which they don’t in any classical Medusa-myth—and help Perseus conquer his enemies and win Andromeda.

Of the many heroic roles essayed by American actor Richard Harrison in European productions, his Perseus is probably his most famous. It's not a great performance, but Harrison's earnestness is winning, and the fact that he isn't a boulder-shouldered monster creates a little more suspense for the hero's fate than one usually sees in peplum.