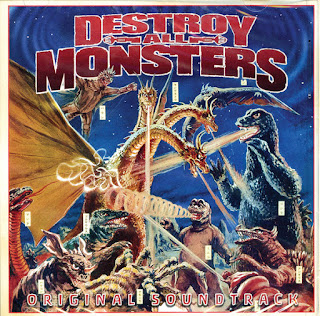 
I have to say up front that I came tardy to the Toho Godzilla series, catching the late 1960s releases in the theater and the earlier ones on television. I was in much the same boat in terms of discovering Marvel comics in the late 1960s and playing catch-up afterwards. The one advantage these situations have in common is that the reader/viewer gets somewhat inundated with all of the story-tropes built up over several yeas. In my case at least, the "embarassment of riches" filled me with a desire to trace the tropes back to the "primal origins."

DESTROY was intended as a potential send-off for all of Toho's roughly interrelated kaiju films, Some of the monsters had crossed over several times, with GHIDRAH THE THREE-HEADED MONSTER and MONSTER ZERO as the standouts. Other critters had made only single appearances, such as Manda in ATRAGON. The titular creature from VARAN THE UNBELIEVABLE barely appears, allegedly because the studio's monster-costume had deteriorated to the point of no return.

Inoshiro Honda, who had helmed most of the key kaiju since 1954's GOJIRA, seems to be agreeing with an executive alleged to have claimed that the series had run out of ideas. DESTROY follows the pattern established in MONSTER ZERO, where insidious aliens take control of Earth's monsters and use them to conquer Earth. As in ZERO, everything on Earth seems to look like the 1960s, but a multi-national project has resulted in a permanent moon base. There are token efforts to show non-Japanese actors in minor scenes, but all of the main actors are Japanese, and lead male Katsuo (Akira Kubo) and his crew are constantly jetting around in flashy rocket-ships more reminiscent of Buck Rogers than of NASA.

Further, for the first and only time in the series, all of Earth's monsters have been humanely pacified and confined to a well-stocked Pacific isle, sometimes called "Monster Island." The implication is that Earth's scientific knowledge has grown so great that even the mighty Godzilla can be restricted to a single island with a device that sprays noxious gas at him. Joining him are Manda, Mothra, Rodan, Angilas, Baragon, Gorosaurus, Varan, Spiga, and Godzilla's son Minilla-- with Mothra seeming a bit out of place, since the giant moth had always been a "good monster" not given to random rampages.

This time the alien visitors strike right away, rather than making overtures of peace as those in MONSTER ZERO did. The Kilaaks-- all of whom look like Japanese women in silver lame outfits-- take over the moon base, implanting control-devices in all of the personnel. The takeover of the moon base and the abduction of the inhabitants of Monster Island are apparently the last steps in the Kilaak's long-term plan. Whereas the invaders of ZERO simply controlled monsters through radio-waves broadcast from their flying saucers, the Kilaaks don't seem to have as many vehicles, since they "seed" Earth with a great quantity of receiving-units, all hidden in obscure places. The idea seems to be that the control-waves are beamed from the moon but have to be re-broadcast on Earth in ordet to control the monsters when they start attacking strategic Earth-cities. However, during Earth's swift response to the incursion, forces of the United Nations (or some similar group) manage to uncover a lot of the receiver-units, and the monsters seem to keep on rampaging nonetheless.

The Kilaaks are actually snake-like beings that were bred to flourish in hot climes and who retreat from cold into stony hibernation-shells. Thus their tactic of taking the appearance of Japanese women doesn't track especially well, particularly when they can control real humans for their world-mastering schemes. The Kilaaks are arrogant about their superior technology, but they're even more hubristic than the average invading extraterrestrial, since at one point they even use one of their human agents to tell the United Nations the location of their base. Thus Katsuo's team is able to infiltrate the base despite its being guarded by Godzilla, rip off an important part of Kilassk control-technology, and bring it back to the military scientists, so that they can reverse-engineer it and turn the monsters against the aliens.

When all is said and done, all the dodgy plotting serves just one purpose: to give the monsters a reason for going on assorted apocalyptic attacks. Individual monsters make a few peripatetic assaults on non-Japanese targets, but Honda saves most of his city-model work for yet another Tokyo thrashing, as Godzilla, Rodan, Manda and Mothra raze the city. Missiles from the military seem to cause as much destruction as any of the titanic terrors.

As good as the Tokyo Stomp is, it can't compare with the ten-on-one monster rally, when humans send their ten native monsters to confront the Kilaaks. The aliens then unleash their own alien servitor, Ghidrah. What's masterful about this fight-scene is that although Ghidrah is played by a man-in-a-suit like the other monsters, the monster's wings and weaving heads made it difficult to stage an involved fight with so many monsters. Honda and his crew used a solution not unlike the conflict of the Big G and Angilas in GODZILLA RAIDS AGAIN: keeping the action rooted to one spot-- aside from some up-and-down motion on Ghirdrah's part-- while using quick cuts and brutal violence to keep the audience invested. Numerous times both Ghidrah and his opponents bite one another savagely, reminding the audience that they are, after all, colossal animals.

All ends happily for Earth and its hulking monster-heroes, and it would've made a good send-off for the original series, had the box office not proven strong enough to keep the franchise running. Continuity glitches aside, DESTROY ALL  MONSTERS remains one of the best of the kaiju genre.

Posted by Gene Phillips at 2:30 PM
Email ThisBlogThis!Share to TwitterShare to FacebookShare to Pinterest
Labels: combative dramas, the marvelous