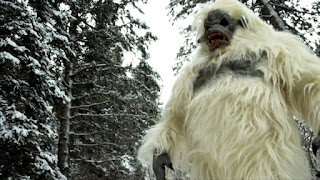 
SNOWBEAST is more or less "Jaws at a ski-resort." A Bigfoot starts picking off skiers at a resort which is celebrating its long history with a winter carnival. Writer Joseph Stefano, famed for his work on the 1960 PSYCHO and on the teleseries "Outer Limits," tries mightily to keep resort-owner Sylvia Sidney and her grandson from sounding too much like the mayor in JAWS. It helps somewhat that the grandson, the first person to spot the snowbeast, describes something much more fantastic than a shark, so that the owner's decision not to warn everyone has a different context to it.

Since it's a TV-movie done on a budget, the director avoids showing the Bigfoot on-camera as much as possible. This results in some amusing "creature-eye" POV scenes. As in JAWS, a loose association of people come together in order to combat the menace, but they're all fairly unremarkable stereotypes: the grandson, the local sheriff, a female journalist who just happens to have done stories on Bigfeet, and her husband Gar. Gar (Bo Svenson) is, apart from the snow-creature, the focal character here. He's a Gold Medal skier who has rested on his laurels for a little too long, and most of the minor subplots concern threats to his masculine ego, such as his wife's wandering affections, but none of his conflicts are especially interesting. Gar gets the honor of slaying the beast, whose nature Stefano's script never explores, except to call it a "mutant." 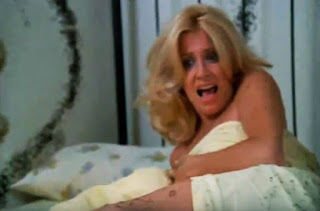 As dull as SNOWBEAST is, ANTS, another telefilm-shocker from the same year, is duller by far. In place of ripping off JAWS, the inspiration here seems to be 1972's FROGS, in which natural creatures revolt against human incursions. The ants, like the creatures in FROGS, are framed as ordinary insects provoked to uncanny wrath. This prompts them to attack a hotel, which like SNOWBEAST's ski-resort, suffers some economic straits. However, this time the proprietor of the business-concern (another Hollywood luminary, Myrna Loy) is a sympathetic type who doesn't do anything to impede others from realizing their mutual danger.

Though various innocents are killed by the invading ants, the script's real targets are an evil developer (Gerald Gordon) and his mistress (Suzanne Somers), because they plan to bilk the hotel's owners out of their property in order to build a casino. Though Somers's character really doesn't do anything but go along with her associate, the film seems to take particular pleasure in having her ravaged by ant-swarms. This may the reason, as Svengoolie reported on his program, that managers of videocassette stories in the 1970s and 1980s reported a high loss-rate of rental copies. I'm not sure if that means that the people swiping the cassettes were fans or Suzanne Somers, or that they really just liked the idea of seeing "Chrissy of THREE'S COMPANY" meet a horrible death.
Posted by Gene Phillips at 2:51 PM
Email ThisBlogThis!Share to TwitterShare to FacebookShare to Pinterest
Labels: astounding animals (u), the marvelous, the uncanny