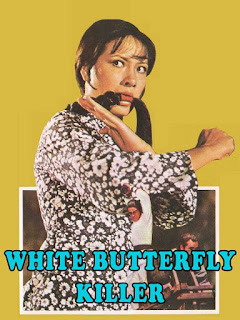 
This film's heroine-- Pao, played by prolific Hong Kong actress Hsu Feng-- is never called "White Butterfly Killer" in the English version of this HK film. The title made me wonder if it might be an example of metaphenomenal cinema, since many HK films of the period touch on such material, even if it's only in terms of kung-fu avengers who wield unusual weapons for justice.

Pao is first seen running a tavern with three female companions, and all four of them display considerable kung-fu talents when local gangsters try to give them trouble. However, Pao is after more than serving drinks. Years ago, she was raped by the head of the local crime syndicate. Though the film doesn't explain how she or her employees acquire top-level fighting-skills, evidently Pao does train herself for the purpose of avenging herself on her rapist and his allies.

Female avengers were not extraordinary in 1970s Hong Kong films, but for once, the female lead isn't simply raped for the purpose of giving her a motive to beat up a lot of villains. To be sure, Pao does kick a lot of asses. But the script, so far as I can judge from the dubbing, devotes some effort to capturing her inner torment. When her romantic interest confesses that he can't credence her lust for vengeance because she seems so "soft," Pao smashes her fist into a wooden door, and asks if he thinks her softness makes her weak. Later, having been counseled that her rage will never be dispelled by seeking vengeance, she beats down one victim but starts to grant him mercy. However, the fellow then tries to jump her when her guard is down, and so pays the price.

The one element of the film that's almost metaphenomenal involves a memento from the time of Pao's rape, for the rapist cut off her queue. Apparently Pao somehow reinforced her ponytail with hide or metal, for when she battles her principal opponent at the climax, she hits the villain with the queue as if it was as hard as a flail. But because this element is used only at the film's end, I decided that it doesn't qualify as an uncanny form of an "outre device."
Posted by Gene Phillips at 3:34 PM
Email ThisBlogThis!Share to TwitterShare to FacebookShare to Pinterest
Labels: combative adventures, diabolical devices (n), the naturalistic