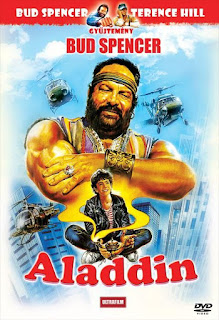 Bud Spencer, best known for the "Trinity" comedy-westerns he did with Terence Hill, played a solo role in this strange piece of Italian cheese. Aside from the last Hill-Spenser collaboration, 1994's TROUBLEMAKERS, ALADDIN is probably the last Spenser film to be accessible to American audiences. (The promo card above blatantly lies, for Hill is not in this film at all.)

ALADDIN is basically a 1960s Disney comedy filtered through 1980s Italian sensibilities. A teenaged loser named Al Haddin stumbles across a lamp which allows him to call up an entity (Spenser) who never calls himself anything but "the Genie of the Lamp" (though he eventually allows other people to call him "Gene"). This Genie, like the one from the famed "Aladdin" take, is not restricted by any "three wishes" rule, but he'll do anything his master commands. Since Al is a nice guy, he usually asks for mundane things like getting a car to impress a cute girl or winning a basketball through cheating with magic powers. At one point, the youth-- who lives with his widowed mother-- even wonders if the Genie would be willing to marry his mother. This seems to be the only thing the supernatural spirit balks at, since he claims, "I'm old enough to be her great-great-great-great grandfather." He does also have one other weakness, in that he loses his powers at night-time. However, he's still a very big guy, and fans who can't get enough of the bulky actor slamming thugs around will find some satisfaction here.

It's a loosely plotted farrago of gags and setups, particularly whenever the Genie runs across the criminal activities of a local Miami crime-boss (who nevertheless seems as Italian as the day is long). Like most Disney comedies, the crooks are mostly involved in petty crimes, like the oddly antiquated crime of the protection racket. That said, there's a very strange section of the film in which the crime-boss has Al abducted and kept with a bunch of younger kids, in what appears to be a child slavery ring, until the Genie rescues everyone. Nothing like that in Disney comedies!

Posted by Gene Phillips at 3:19 PM
Email ThisBlogThis!Share to TwitterShare to FacebookShare to Pinterest
Labels: combative comedies, the marvelous