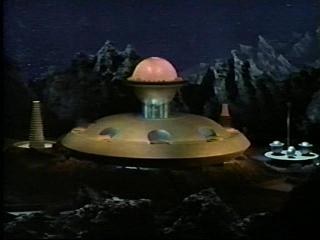 
SF-films are not known for creating finely detailed viewpoint characters, but I'd never seen one that barely establishes such characters at all.

BATTLE IN OUTER SPACE begins with an alien invasion of Earth, which, in keeping with a stated theme of director Inoshiro Honda, ends up uniting the fractious nations of the planet into a common defensive cause. In the first fifteen minutes, the viewer watches the aliens using a gravity-device to cause ships and bridges to slip the surly bonds of earth, and the shocked representatives of many nations converge at a conference in Japan to discuss the matter. One of the viewpoint characters, a Japanese officer named Katsumiya gives a report on his findings, but at this point it's not discernible that he is particularly important to the story. A turbaned delegate. Ahmed, gets up and begins actly oddly, attracting the attention of a woman named Etsuko. She's unable to convince the next two people she talks to-- a fellow named Iwamura and the officer Katsumiya-- that Ahmed was acting oddly, and only then it is evident that these are the film's viewpoint characters. I wondered if this down-played approach to the characters was the consequence of a bad American edit. However, a little research disclosed that although BATTLE is not a literal sequel to 1957's THE MYSTERIANS, Etsuko appeared in the earlier film as the sister of one of the heroes. None of the major BATTLE characters appeared in THE MYSTERIANS, but since the same writer wrote both, it may be that he made some connection that didn't "carry over" into the finished script. In BATTLE Etsuko is the romantic interest to new character Katsumiya. It isn't even clear that the two of them and their buddy Iwamura are all qualified astronauts, though later in the story this becomes a significant plot-point.

Ahmed is the second prong of a two-pronged attack, for he's one of the first Earthmen to be brainwashed by the invaders. Ahmed is used to undermine the conference, but he fails and is executed by a long-distance ray from the sky. Before the delegate dies, he announces that the people of "the planet Natal" intend to make all Earth-people into slaves, which is all the motive one gets regarding the invaders.

Fortunately, though Earth doesn't have a fleet of saucers like the Natalians, it does have a functioning space-program, as well as an experimental heat-ray. Once scientists have determined that the Natalians have made a base on the moon, they get two rockets ready lickety-split and send them off to attack the enemy. Though the conference sports assorted non-Japanese faces, the crews of the two ships are all Japanese officers, including Katsumiya, Iwamura, and Etsuko. However, an earlier sequence establishes that the expedition now has a mole along for the ride. The Natalians have brainwashed Iwamura, who lies in wait for the opportunity to blow up his own ship in progress. By chance he's intercepted by a crewman and gets tied up, so that both ships reach the moon without further trouble.

As with the overly easy transition from Earth to moon, the astronauts, using ground-cars find the domed HQ of the Natalians without much trouble. There is one altercation, when the astronauts, infiltrating a system of caves, encounter a bunch of chittering, space-suited humanoids who try to capture Etsuko. Presumably the humanoids are the Natalians, though curiously none of them are armed, and are easily blasted to bits by Katsumiya.

The humans set up their heat-ray to make their attack. At the same time, though, Iwamura-- who's been left behind, totally unsupervised-- escapes his bonds and manages to blow up one of the unoccupied ships. A clash of energies ensues as the astronauts unleash heat-blasts upon the dome, which returns fire. By coincidence, the astronauts manage to destroy the dome just before Iwamura destroys the remaining ship. Once Iwamura is no longer receiving radio broadcasts from the Natalians, he reverts to normality, and, in the film's best emotional moment, he sacrifices his life to make sure his comrades get back to the rocket and return to Earth. The surviving ships of the Natalians then give pursuit, resulting in another clash of technologies before the united people of Earth triumph.

BATTLE, though boasting the signature miniatures and animated energies characteristic of FX-wizard Eiji Tsuburaya, is a fairly pallid space-opera compared to THE MYSTERIANS. Perhaps it would have benefited from a more dynamic central hero. But as written, BATTLE is in the tradition of Wells's "War of the Worlds" and most 1950s invasion-films, in that the aliens-- poorly conceived though they are-- are the pivotal, and thus central, characters.


Posted by Gene Phillips at 2:09 PM
Email ThisBlogThis!Share to TwitterShare to FacebookShare to Pinterest
Labels: combative adventures, the marvelous