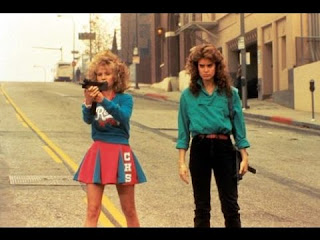 
NIGHT OF THE COMET is often described as a SF-comedy. I don't think that it is, but if it was, it would definitely be of the "one-joke" variety. That one vivid joke-- what happens to a couple of young "valley girls" when the rest of the world is destroyed-- has made COMET into a minor "cult film," though I also don't think it deserves that distinction either.

As a light take on the SF-genres of the "post-apocalypse" and the "zombie plague" respectively, COMET is diverting enough. But like a lot of films without much focus, the best mythic material-- psychological in this case-- appears at the beginning. The picture introduces its audience to two teenaged sisters living in Southern California, Regina and her slightly younger sister Samantha. Regina works as an usher at a movie-theater, plays video games, and has occasional sex with her boyfriend. Samantha gets the burden of introducing their backstory. Their barely mentioned mother left the sisters' father long ago, and the father-- a military man-- departed to serve in some unspecified capacity in Honduras. But he put his new wife Doris, a full-time evil stepmother, in charge of the two girls. Not only does Doris play around on her absent husband, she even punches out Samantha for being too sassy while Doris is holding a party.

The occasion of the party is the appearance of a comet due to pass very close to Earth. Though a voice-over warns the audience that the comet last appeared near Earth at the time of the dinosaurs' extinction, most people on Earth-- or at least in America-- are celebrating the heavenly body's approach with "comet parties." By chance neither Regina nor Samantha are up and about watching the comet's passage, and that's one reason that they-- and a tiny handful of other humans-- are spared the effects of the comet's dust. In the space of one night, most of humanity dissolves into calcium dust, and another small handful turn into unusually chatty zombies.

After Regina and Samantha get over the shock of being almost the only persons in the city, they take measures to arm themselves. Fortunately they've had training with guns and in armed combat, presumably due to their absent father, and this comes in handy defending themselves from killer zombies. Then they meet Hector, another normal human who avoided being affected by the comet-dust. Regina seems very interested in Hector, but strangely Samantha doesn't seem to consider moving in on her sibling's territory, though Samantha does enjoy tormenting her sis about whether or not Hector might be gay.

The two girls and Hector also fall afoul of a government think-tank. These scientists also avoided the dust but who are now ruthlessly gathering other normals and using them in experiments in order to find a cure for the dust-poison. Eventually the cure is made irrelevant when the dust is dispelled by rain, and so Hector and Regina must begin thinking about repopulating the Earth, apart from a handful of surviving kids. Samantha is belatedly given a suitor her own age so that she doesn't end up being the odd girl out.

There are some amusing moments in COMET, the standout being the girls having fun fooling around in a nearly deserted mall (where, in the tradition of George Romero, they meet more zombies). But a smattering of cute lines does not make this movie a comedy. In essence, the film follows the same dramatic trope seen in most apocalyptic tales: the need for the younger generation to rebuild the world-- effectively becoming their parents-- after a cataclysm has conveniently wiped away the previous generations.

Posted by Gene Phillips at 3:33 PM
Email ThisBlogThis!Share to TwitterShare to FacebookShare to Pinterest
Labels: combative dramas, the marvelous