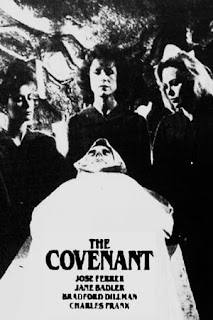 Primarily I rewatched this 1985 TV-pilot to see whether or not it fulfilled my criteria for a combative work. I'm happy to find that it does not, because COVENANT is a dull bit of business and not worth giving much evaluation.

There are two opposed factions in the film. The starring villains are a ruthless family, the Nobles, who comprise a Satanic cult that has existed in some form since the days when the Aryans invaded India. The script implies some identity between these archaic Aryans and the Nazis of the 20th century, and connects them through some alliance with the Christian Satan, to whom all members of the cult render up their souls for plenary power. On the other side is a group called "the Judges," who are implicitly linked to the warrior-judges of ancient Israel, though it's unclear whether or not this group has been around for the same number of centuries.

The Judges, led by the Biblically named "Zachariah" (Barry Morse), try to convince one of the Nobles' new pawns, one David Wyman (Charles Frank) of the evil of the Nobles and their insidious financial schemes. Strangely, Zachariah talks less about the specific evils perpetrated by the family, than about the fact that they recognize no barriers against inbreeding. Cousins marry cousins, uncles marry nieces, and so on. This was apparently the writers' attempt to marry the OMEN-like concept with something akin to a night-time soap like DALLAS. However, COVENANT is one of the few dramas to perform the feat of making institutionalized incest dull.

In addition to converting David to the cause, the other major plot-line is a struggle within the family. The youngest relation, teenaged Angelica Noble, is the only one not aware of the demonic pact, nor the fact that she's scheduled to be brought into the fold upon her 21st birthday. Her mother tries to spare her that fate, and this conflict leads to assorted supernatural deaths, again in what looks like a blatant imitation of the OMEN formula.

It's a decent blend of actors, including Jane Badler and Jennifer Cooke, who had both worked on the V teleseries. But the performers have little to work with, and the TV-film doesn't even have the virtue of delivering a finished plotline, as Angelica's initiation is still pending as this rough beast slouches to completion.


Posted by Gene Phillips at 3:51 PM
Email ThisBlogThis!Share to TwitterShare to FacebookShare to Pinterest
Labels: the marvelous