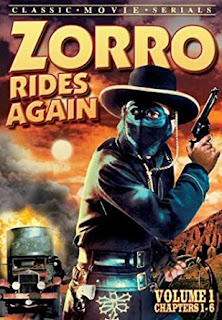 
ZORRO RIDES AGAIN is not only a rather bland take on the original "Zorro" story-- which would be successfully remade in 1940. It's also one of the lesser collaborations of directors William Witney and John English, who would work on such stellar serials as PERILS OF NYOKA and THE DRUMS OF FU MANCHU. Still, ZORRO was the first teaming of the two directors, so it may be excusable that they didn't do much more than provide twelve episodes of riding and shooting.

The story takes place in 1930s California, but there are hardly any signs of modern civilization, and I suspect the story was recycled from earlier serial-stories in which dastardly outlaws besieged frontier towns. Marsden (Noah Beery, who was a villain in the 1920 MARK OF ZORRO) a power-hungry financier, wants to gain total hegemony over a railway that joins California to Mexico (thus endangering U.S-Mexico relations, though this is only mentioned in the first episode). Thus Marsden's gang, led by a Caucasian bandit styled "El Lobo," rains havoc upon the locality until a new Zorro appears. This hero descends from the original Diego de la Vega, and his secret identity, James Vega, carries over the name. Vega too is played by a Caucasian actor, John Carroll, though this isn't problematic given that the original Zorro was an aristocratic Spaniard. (He might've had Ottoman blood in his veins, but probably not that of Native  Americans.)

Like most serials, there's no real plot, just assorted perils and resolutions, until the conclusion, when, instead of the villain being unmasked, the hero is, though it doesn't prevent him from gaining the ultimate upper hand, much like the original McCulley source-novel. Carroll plays the double role well (he shifts to an accented voice in his Zorro persona, but the accent sounds reasonably natural and non-offensive to my ears), and though this Zorro never wields a sword, there's plenty of whip-action to be had. Indeed, the whip-scenes provide the serial's best action, particularly when the hero humiliates a big bully who's just threatened a young Mexican woman.

Otherwise, apart from the serial's history in the collaboration of Witney and English, ZORRO RIDES AGAIN is mostly interesting as being the of four revivals of the character in serial-format, including ZORRO'S FIGHTING LEGION.

Posted by Gene Phillips at 10:50 AM
Email ThisBlogThis!Share to TwitterShare to FacebookShare to Pinterest
Labels: combative adventures, outre outfits (u), the uncanny