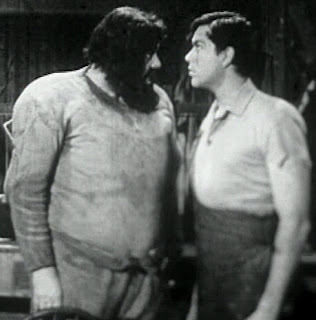 
This low-budget version of Al Capp's popular comic strip has more of the raucous qualities of its model than did the 1959 musical, and it's a little funnier, as long as one isn't expecting more than a B-movie can deliver. I've seen one review that says its plot is "all over the place," but Capp's comic-strip continuities followed the same "everything and the kitchen sink" pattern. The only thing that's not much like Capp is that the film doesn't indulge in any of the fantasy-content often seen in the comic strip.

The flick is the first live-action depiction of Capp's invented hillbilly ritual, "Sadie Hawkins' Day." In contrast to the 1959 film, the event doesn't dominate the proceedings. Things start out with the usual status quo: Daisy Mae (Martha O'Driscoll) pursues hunky Li'l Abner (a well-cast Granville Owen), but he's wary of being trapped into marriage, which in his mind correlates with always being debilitated by age and trammeled with the burden of children and grandchildren. He'd rather spend his youth fishing and eating pork chops, though his Mammy (Mona Ray, wearing big appliances on nose and chin) schemes to have him marry Daisy Mae.

Through a comic misunderstanding, Abner gets the idea that he's going to die soon, so Mammy convinces him to propose marriage to Daisy Mae, since impending death will spare him the rigors of wedded bliss. Then Abner gets the idea to provide for his aging Mammy and Pappy by earning a reward for capturing the mountainous malefactor Earthquake McGoon (Charles A. Post, in his last billed role). Abner interrupts McGoon in the midst of a bank robbery and they exchange titanic blows, though neither character seems quite as superhuman as the comic-strip versions. Abner wins and tries to take McGoon to the law. Mammy, watching over him, prevents McGoon's buddies from interfering, even hauling off and clouting one of the fellows, which is also in line with the Mammy of the comic strip.

However, to escape the whole gang, Abner must get help from a local girl, Wendy Wildcat (Kay Sutton), and she'll lend aid only if Abner promises to marry her. The big galoot, figuring his fatal illness will save him from two marriages as easily as one, agrees. But sometime after he collects his reward, he figures out that he's not going to die after all. The local authorities agree that the matter can only be settled by the Sadie Hawkins race, depending on whether Dairy Mae or Miss Wildcat catches Abner. To complicate things further, Abner's foolish Pappy lets loose McGoon, on the condition that the brute keep Abner from marrying Wendy. McGoon, of course, intends to keep his word by killing Abner. Regrettably, there's no second battle between the two big hillbillies, but since Earthquake is brought low by sheriffs toting sticks of dynamite, I still rate this a combative comedy. There are slight suggestions of fantasy-elements-- Abner dreams about meeting an angel, and in his first meeting with Wendy he's briefly thinks she's a wild animal in human form-- but none of these tidbits make the film metaphenomenal.

The film was not successful and the standard copy ends with an odd jump-cut, suggesting that maybe the money ran out and a faux ending was stitched on. Buster Keaton has a supporting role as the goofy Indian "Lonesome Polecat," and the cast also boasts other notable comic talents, including Chester Conklin and Edgar Kennedy. These days director Albert S. Rogell is probably best known for his duties on Universal's 1941 THE BLACK CAT.

Posted by Gene Phillips at 12:35 PM
Email ThisBlogThis!Share to TwitterShare to FacebookShare to Pinterest
Labels: combative comedies, the naturalistic