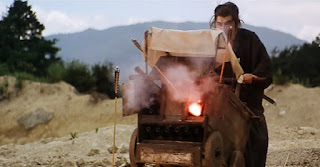 
This DVD collection includes the six films adapting the very long chanbara ("swordplay") saga of the LONE WOLF AND CUB manga. The collection also includes a re-edited Americanized film-version, SHOGUN ASSASSIN, derived mostly from the second film in the series. and various extras.

By way of explicating the manga's concept, I wrote this here:

I won't attempt in this post to cover every aspect of the complicated manga-saga LONE WOLF AND CUB, a series taking place during the era of Japan's Shogunate rule. Main character Itto Ogami, a master of the samurai sword and executioner to the Shogun, is cast out from his lofty position due to the political maneuvers of his enemies. With the fall of his aristocratic house, he wanders Japan as a masterless ronin, hiring out his sword as a master assassin. At the same time he's constantly pursued by enemies for the price on his head. His only companion is his very young son Daigoro, whom Itto usually pushes in a baby cart. This image alone, a melding of the worlds of innocence and violence, is quintessentially Japanese in character. That said, not every LONE WOLF story is equally mythic. Some stories are simply tales in which Itto takes on some powerful foe and wins out. Other stories succeed in communicating the rigor of the samurai ethos but characters may remain flat.


The best of the manga-stories manage to communicate a pitiless world of grim duty, in which Ogami even occasionally slays innocents who in some way come into conflict with his samurai sense of obligation. It would not be hard to see Ogami's world through the lens of irony, depicting Japan's medieval world as a chaos of petty intrigues. However, the episodic stories constantly tout Ogami's samurai ethos as admirable, and even when he's forced to slay a valiant foe, the authors present the event as a clash of noble spirits, in line with the invigorating aspect of the adventure-mythos. Yet because the stories are fairly episodic, they vary wildly in terms of capturing a modern myth of the peerless samurai hero.

The six 1970s films display an equally high level of craft, but like many of the manga-stories they don't quite rise to the "good" level of the best myth-films. All six star Tomisaburo Wakayama and Tomikawa Akihito as Ogami and his son Daigoro, though it could be argued that the famous baby-cart-- outfitted with hidden knives and rapid-fire rifles-- is the unbilled "third star" of the movies. Even if there were no other metaphenomenal elements in the LONE WOLF films, the baby-cart-- with which Ogami takes on whole armies in two separate series-films-- would transport these tough-minded swordplay-films into the realm of the uncanny. Strangely, of all the manga-stories adapted, the six here don't choose to translate "The Guns of Sakai," which relates the way in which Daigoro's stroller gets weaponized.

Because the films are all of a piece, I won't review them individually, though I will note that the filmmakers did not choose to adapt the final story of the manga, in which Ogami destroyed the leader of his enemies. Instead, I'll simply indicate the metaphenomenal elements to be found in each film.

SWORD OF VENGEANCE (1972)-- here's the first revelation of the baby cart's special capacities.

BABY CART TO HADES (1972)-- Ogami defeats costumed ninja in various disguises. This is the first of the two films in which Ogami defeats a small army.

BABY CART IN PERIL (1972)-- Ogami is hired to slay a female assassin seeking to avenge her rapist by killing many of his retainers; she sports extravagant, demonic body-tattoos designed to distract her opponents. The rapist is apparently a hypnotist, able to cause his opponents to see flames enveloping his katana, but the woman's tattoos throw him off his game so that she can slay him before Ogami slays her.

BABY CART IN THE LAND OF DEMONS (1973)-- Ogami must recover a letter from the hands of a Buddhist monk. This is the closest that the movie-series comes to the marvelous-supernatural, since when Ogami draws near the monk, the assassin cannot attack the monk because he has transcended ordinary life. Still, one can interpret this form of "chi" as something akin to hypnosis, and Ogami manages to transcend his own limitations to complete his mission.

WHITE HEAVEN IN HELL (1974)-- Ogami is threatened by a clan of tricksters who come close to unsettling his samutai calm with their ghostly appearance. Indeed, the three foremost killers were buried alive for 42 days, without food or water, and are viewed by their leader as being "neither dead nor alive." Nevertheless, Ogami is able to kill the unkillable, after which he destroys another army.
Posted by Gene Phillips at 2:07 PM
Email ThisBlogThis!Share to TwitterShare to FacebookShare to Pinterest
Labels: combative adventures, diabolical devices (u), superlative skills (u), the uncanny