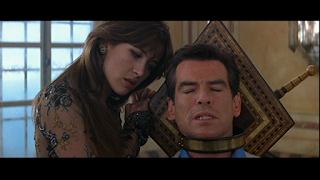 As in the previous Brosnan-Bond film, the villains are fairly down to earth in terms of their technology-- once again, involving an attempt to unleash a nuclear bomb, though this time, the villain is out to create a capitalistic hegemony rather than to foment war between nations. However, Bond's super-car is back, complete with a surface-to-air missile, which is enough to boost the movie into marvelous territory. Bond himself has a new gimmick, a flash-bomb inside a pair of glasses, and in the film's rousing opening action-scenes he pilots a submersible boat in pursuit of an assassin.

WORLD IS NOT ENOUGH is the first and last Bond film directed by Michael Apted. It's also the last Bond writing-credit for Bruce Fierstein, after he received sole billing for TOMORROW NEVER DIES. For whatever reason, Neil Purvis and Robert Wade, who share screenplay credit with Fierstein on WORLD, apparently became the new favorites of the producers, for the two of them remained attached to the franchise all the way through 2015's SPECTRE.

WORLD shows some of the ambitiousness of GOLDENEYE in terms of redefining Bond for the nineties. As in GOLDENEYE there are some attempts to tweak Bond's image as a ladykiller, while still allowing him to bed three women in the course of the film. Yet the film emphasizes Bond's role as a spy engaged in battling real-world terrorism, which in this case is entwined with a particular capitalistic enterprise. In the aforementioned opening scenes, Bond, seeking to learn who killed a MI6 agent, is used as an assassin's pawn in killing British oil magnate Robert King. Moments before King is slain, Bond sees the tycoon conclude a meeting with Bond's superior M (Judi Dench), and a past romantic vibe between M and King is strongly implied. Despite a long pursuit of the person responsible for the bomb, the agent is unable to keep the assassin from taking her own life, ostensibly out of fear of a mysterious "him."

MI6's investigation suggests that Robert King was killed by terrorists targeting a pipeline under construction in Azerbaijan. Further, M had an involved professional relationship with Robert King in addition to any unverified personal attachment. Years ago King's daughter Elektra was kidnapped, and King came to M for help. Instead of liberating Elektra, M sought to use Elektra as a means of trapping her kidnapper, noted terrorist Renard. M failed to trap Renard, though a later attempt on the head terrorist left a bullet in the man's brain, while Elektra managed to get free sans M's help. Now Elektra King (Sophie Marceau) has inherited her father's firm, and Bond suspects that Renard may seek to attack her and her company once more.

The ambivalence of the Greek name "Electra"-- which I'll address shortly in more detail-- may give the game away early. Bond, as he so often does with women he seeks to protect, falls into bed with Elektra, but in a reversal on TOMORROW NEVER DIES, he finds out that his new conquest was previously seduced by a villain, in this case Elektra's former captor Renard. The two are both partners in romance and in crime, and their long-range plan is to trigger an atomic meltdown to eliminate other pipelines in the vicinity, so that Elektra's hegemony will be unchallenged. Elektra willingly collaborated in the slaying of Robert King, partly because she blamed him for not ransoming her (she also blames M, and comes close to snuffing her as well), partly because the British magnate "stole" the Azerbaijan oil-lands from Elektra's mother, though we never hear much of anything about this alleged theft. Bond, aided by a requisite Good Girl (Denise Richards), leaps through a series of action-hoops to head off the holocaust, though in terms of stuntwork, none of the set-pieces equal the one at the film's opening. However, in terms of emotional resonance, none of Bond's athletic actions prove as grueling as his fatal confrontation with Elektra, in which, in contradistinction to his normal gallantry, he's forced to shoot her dead to keep her from launching the nuclear option.

In some quarters Elektra King was touted as movie-Bond's first "head villainess," as opposed to a henchwoman like Pussy Galore or Xenia Onatopp. However, Elektra doesn't really have the mojo to full that role. Part of her failure as a villain lies in the fact that her vengeance is set into motion by a more experienced male terrorist, even though there are a few moments in which Renard becomes somewhat subordinate to Elektra. Moroever, actress Sophie Marceau just doesn't have the talent to pull off a role of such emotional depth. Both Brosnan and Robert Carlyle (who plays the bitter, doomed terrorist Renard) act Marceau under the table.

Authors don't always use Greek words to reflect their original associations, but I think Purvis and Wade had some knowledge of both the Greek myth of Electra and the appropriation of the name by psychology. In the latter discipline, an "Electra complex" was one in which a grown daughter has become fixated upon her father, whether emotionally or erotically. Carl Jung coined the term as a response to Freud's "Oedipus complex," and the reference grew out of Electra's role in Greek myth. In this myth-cycle, the Greek lord Agamemnon returns from the Trojan War in triumph, only to be murdered by his wife Clytemnestra and her lover Aegistus. Only Electra, daughter of Agamemnon and Clytemnestra, seeks to avenge her father, manipulating her younger brother Orestes into slaying the two people responsible for Agamemon's death.

Interestingly, Purvis and Wade turned the original Electra situation on its head. In their hands, Electra honors her mother and views her father as a thief, though this orientation probably came about after Robert King, on the bad advice of M, failed to save Elektra. Thus the daughter-figure in WORLD resents both the father and a "bad mother," reversing Electra's focus on her mother and a "bad father." This is probably as far as the parallels were meant to go, though Bond does serve Elektra's ends the way Orestes does those of his sister. Renard bears no strong comparison to anyone in the Greek tale. However, since he's probably named for the folkloric trickster-fox Reynard, he might be seen as an embodiment of Elektra's own treacherous nature.

This is also one of the few Bond films in which the villains have some human dimension, with the result that M's ruthlessness with regard to innocents doesn't leave her looking very heroic.  The darker aspects of the storyline bid fair comparison with the similarly doleful 1997 espionage-teleseries LA FEMME NIKITA.

Posted by Gene Phillips at 2:55 PM
Email ThisBlogThis!Share to TwitterShare to FacebookShare to Pinterest
Labels: combative adventures, the marvelous