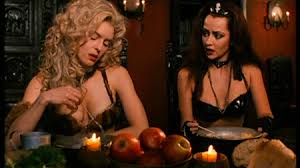 Speaking as a critic who makes no apologies for masculine-oriented entertainment-- which often means anything that parades around lots of sexy women-- BURIAL OF THE RATS, a Showtime cable-movie made under the rubric of "Roger Corman Presents" is an embarrassment to lovers of exploitation cinema.

Thanks to the success of 1992's BRAM STOKER'S DRACULA, the Irish author's name also appeared on a few low-budget adaptations of his work. The short story "Burial of the Rats" concerns a young man in Paris who runs into a bunch of scruffy beggars and witnesses a metaphorical "burial" in which a dead body is consumed by a swarm of rodents. It's pretty thin material, even for a cable flick, so it's not surprising that Corman stuffs his adaptation with all sorts of anachronistic elements.

In BURIAL, the unnamed young man in Paris is Bram Stoker himself, who tells his patrician father that he wants to be a writer some day. He's then separated from his doting dad by a gang of thong-clad raiders, all women in thongs and bikini-tops, sometimes referred to as "the Rat Women." Bram is taken to their secret lair, where he meets "The Queen" (Adrienne Barbeau). The Queen relates her feminist agenda, possibly derived from the classical myths of the Amazons, in that the Queen brings together women misused by brothels, bad husbands, and other tools of the patriarchy. (Barbeau's character alludes to having been abused by some paternal figure in her past.) Her agenda becomes a bit suspect when the viewer sees that all of these Parisian Amazons are hot model-types, but she does have the requisite man-hatred. Bram is only saved when a sympathetic "Ratbabe" named Madeleine (Maria Ford) suggests that maybe they can use Bram to spread their legend to all of Paris, and perhaps make it easier to prey on Parisian targets. However, another Ratbabe, name of Anna (Olga Kabo), secretly has lesbian designs on Madeleine, and doesn't like seeing the blooming romance between her and Bram. Oh, and there are some rats hanging around the hideout of the Rat Women, but as in the short story, they play a minimal role until the climax, where they're responsible for devouring a body with the speed of a piranha-school.

The Rat Women-- all of whom are skilled swordswomen, though nothing explains how they became so-- do get a couple of opportunities to vent their spleen on nasty men. Yet the romance between Bram and Madeleine takes priority, and effectively spells doom to this 19th-century incarnation of the Lesbian Nation. Parisian police restore the status quo by invading the Rat Women's redoubt and dueling them all to death in a series of uninspired sword-fights, and only Bram "am escaped to tell" his contemporaries of his strange if banal adventure.

Corman has shown a proclivity for soft sexploitation for decades, running from the 1956 SWAMP WOMEN to the BLACK SCORPION telefilms that also appeared in the Showtime package. But both of the Scorpion and the Swamp Women, however risible, display a certain degree of power as well as sexiness. The Rat Women, in contrast, are never more than the sum of their exploitative parts.

Posted by Gene Phillips at 6:56 PM
Email ThisBlogThis!Share to TwitterShare to FacebookShare to Pinterest
Labels: astounding animals (u), combative dramas, the uncanny, weird families and societies (u)