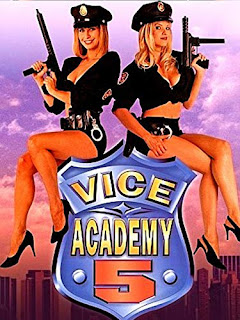 
Having seen all six of these sex-and-dumb-cops flicks when they were broadcast on USA, I knew that the only reason to watch any of them was for the "babe quotient." However, the series does have one other distinction, for the series has the rare ability to make their original model, the POLICE ACADEMY series, look like the culmination of the Aristotelian unities. (Also, these two were the only one I could see for free on Amazon Prime.)

And then there's just your basic check-it-off-the-list appeal for the ardent metaphenomenalist. To the best of my recollection, the POLICE ACADEMY flicks had absurd things happen but stayed within
the realm of the isophenomemal. The VICE series-- which focuses on just two incompetent policewomen rather than an ensemble of crazy cops-- wanders back and forth between these domains, sometimes even pitting the policewomen against science-fiction menaces or supervillains.

Given that all of the films in the series have no appeal beyond hot babes and (occasionally) half-decent slapstick violence, it doesn't mean much to say that 5 is a little more inventive than most of the flicks. Candy and Tracy, whose characters boil down "the nice one" and "the bitchy one," take time out from goofing up their busts (the kind where you lock people up afterward) to investigate Heidi Ho (J.J. North), a computer game-character who translates herself into real life. Heidi's not too consistent in her motivations-- one minute she wants to screw a lot of guys for money, then she decides she wants to help a young guy (the one who called her forth) with his love life, and finally she's trying to take over the prostitution rings of the city (which are apparently made up of one pimp and two hookers). Only the performances of North and Elizabeth Kaitan, the latter playing the naive Candy, are worth watching for anything but their hottitude. 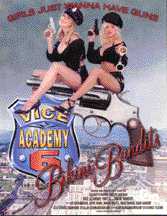 VICE 6 has no fantasy-aspects at all, and I'm stretching a point even to say that it involves any sort of "bizarre crime."  The two "flatfoots-in-heels" are sent to deposit their captain's money in the bank, get ripped off by robbers, and are accused of stealing the money themselves. They're soon cleared of these charges, but bitchy Tracy decides that prison is a good fit for innocent Candy, and frames her so that she goes instantly to the lockup, without so much as a trial!  There's not even as much slapstick as usual for one of these films, though for the last time in the series, the Nice Lady Cop is given the chance to beat up on the Nasty Lady Cop. However, it's not even a particularly good catfight. At least J.J. North knew how to sell a fake punch.

Posted by Gene Phillips at 3:08 PM
Email ThisBlogThis!Share to TwitterShare to FacebookShare to Pinterest
Labels: bizarre crimes and crimefighting (n), the marvelous, the naturalistic