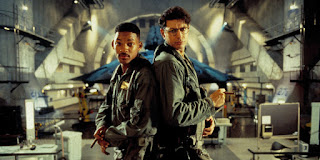 
In its day INDEPENDENCE DAY won a Golden Raspberry for "worst film grossing over 100 million." This seems a trifle unfair, given that most successful blockbusters are thinly plotted excuses for huge FX scenarios. In terms of depicting melodramatic characters with verve, DAY shows the writer/director/producer team of Dean Devlin and Roland Emmerich in much better form than their previous hits STARGATE and UNIVERSAL SOLDIER, to say nothing of the derivative 1998 GODZILLA.

Arguably Devlin and Emmerich are better when they focus not on one or two protagonists but on large ensembles, some of whom may get terminated in the course of the conflict. DAY is H.G. Wells' WAR OF THE WORLDS for Generation X, but this time, human beings don't have to depend on germs to defeat the superior technology of the invaders. Though the aliens-- later dubbed "Harvesters"-- are a mindless swarm not unlike Wells's Martians, Devlin and Emmerich portray humans as having a more significant quality: that of adaptability. All of DAY's centric heroes show an intrinsic ability to delve into alien tech and master it with very little trouble. Some critics poked fun at the unbelievable ability of computer-nerd David Levinson to hack into the Harvesters' computer-systems, and this is a fair point. However, other characters display a similar ability to master systems with very little hassle, alien or not. Hotshot pilot Steve Hiller learns how to fly alien attack-vessels without even a run-through. Former pilot President Whitmore, having manned a desk for years as Commander in Chief, is suddenly able to call up all of his old pilot-skills with no real effort, and tragicomic victim Russell Casse becomes a hero in the war against the aliens, despite having flown only a crop-dusting plane for years. The common thread of DAY bears some resemblance to the more explicit theme of 1984's RED DAWN, which shows the ability of ordinary American teens to become "citizen-soldiers" in the face of an overwhelming menace.

Ultraliberal critics probably objected to Devlin and Emmerich's attempt to extend the ethos of the American Revolution into a worldwide principle of liberation, in which the invading aliens-- explicitly compared to a swarm of locusts-- are a menace from "outside" that brings all of the warring nations together. Nevertheless, the script brings together a wide variety of iconic images to justify the film's title. An early image of the Statue of Liberty being overshadowed by an alien vessel is one of DAY's most powerful moments. The mythology of secret government installation "Area 51" links DAY to the postwar mythology of "flying saucers," and even small references to Fourth of July celebrations, such as fireworks, fit into the greater tapestry of resisting dictatorial powers.

Of course, the Raspberry people may have downgraded DAY because it does have its share of risible moments. Shortly after the aliens destroy the White House, Levinson's quirky dad tries to play matchmaker between his son and the son's ex-wife, with the killer line, "I think there's still love there." There are other bad lines, but for me even one good line-- as when Will Smith's Hiller punches out an alien with the words, 'Welcome to Earth!"-- can outweigh all the clunkers. 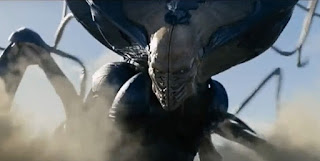 The strangest thing about INDEPENDENCE DAY RESURGENCE is not just that it didn't appear until twenty years later, nor that it was, like most sequels, a rather passionless reprise of the original. What's surprising is that even though this follow-up invasion once more takes place on July 4th, the 20th anniversary of the Harvesters' victory, the script doesn't even try to duplicate any of the first film's patriotic rhetoric or its use of visual icons.

Instead, it's another military soap opera, with aliens. Dylan Hiller, stepson of the Will Smith character (written out of the series by an off-camera death), has a grudge against fellow pilot, "lone wolf" Jake Morrison. Jake lost his parents in the first invasion but has somehow managed to become the boyfriend of Patricia Whitmore, who is both a fellow pilot and the daughter of former president Whitmore. This "male bonding" is one of the sequel's weakest elements, though the romance between Jake and Patricia is at least passable. Other new characters, like an African warlord and a lady pilot from China, don't even register on the charisma-meter.

Somewhat stronger is the script's re-framing of the older characters from the first film. Russell Casse remains dead, but Doctor Okun, apparently killed in DAY, "surges" back to life, evincing a psychic rapport with the returning aliens. Thomas Whitmore, whose contact with the Harvesters in the first film was far briefer, nevertheless also feels a tingle from his "alien-vibe sense." David Levinson and his quirky dad are also back, and though I could've done less with Judd Hirsch, the other three actors-- Goldblum, Spiner and Pullman-- seem to have the most fun with their roles.

Aside from a big crowd-pleasing end-scene with a giant Harvester-queen, the invasion-FX are generally dull. There are also no standout lines of dialogue, either for good or ill. The only improvement is that, whereas as DAY tended to show women in roles of "standing by their men," RESURGENCE does put two female characters, Patricia and the Chinese pilot, into combative positions.

Though I've categorized a lot of the "alien-invasion" films I've reviewed as "dramas" because such films often focus on the "pathos" of the world's near-demise, these two films fit better into the Fryean mythos of invigorative adventure.
Posted by Gene Phillips at 2:01 PM
Email ThisBlogThis!Share to TwitterShare to FacebookShare to Pinterest
Labels: combative adventures, the marvelous