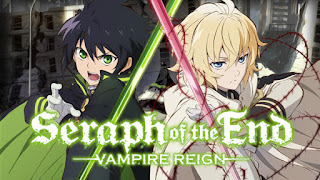 
I've been finding that a lot of the fantasy/SF adventure-manga of the 2010s-- with occasional exceptions like the BLACK CLOVER series-- shows a tendency to emphasize elaborate designs over strong characterization and backstory.  SERAPH OF THE END, a two-season anime show (with one OAV I have not seen), is one of these lesser entries, though at least it's not as thoroughly incoherent as DATE A LIVE.

Possibly the original SERAPH manga expounds better on the narrative's post-apoc cosmology than the anime. In any case, I suppose the showrunners didn't think anyone cared about fine details, given that the story starts out by killing off ninety percent of the human race due to a man-made virus. However, the storytelling is so slack that initially I assumed that the story's "villains," a race of effete aristocratic vampires with jokey in-names like "Tepes" and "Bathory," were created by some mutation brought on by the virus. Later episodes indicate that the vampires may have always existed in the shadow of humankind, and that the decimation allows them the chance to emerge and make human beings into their "livestock."

The principal character, Yuichiro Hyakuya, is first seen as a middle-school youth being raised in a vampire-run orphanage, wherein all of the orphans have the same surname, actually derived from that of the orphanage. Yuichiro-- "Yu" for short-- is your typical tough-talking brat, but he's strongly bonded to his fellow orphans despite his pretense to lack of fellow-feeling. However, when the vampires decide to "play with their food," Yu is the only boy who escapes the slaughter. Though there are five other kids in Yu's "family," only one, his buddy Mikaela, gets much attention-- reason being that he's the only one the narrative keeps in a semblance of vampiric life.

Providentially Yu is taken in by the Japanese Imperial Demon Army, which is attempting to break the stranglehold of the vampires' reign. Having lost his family, Yu wants to be a lone wolf striking out at his bloodsucking foes, but the teen's mentor, Guren Ichinose, insists that first Yu must learn to cooperate with a squad of experienced soldiers. The psychological myth here is pretty simple: despite his trauma from losing one family, Yu can only prosper by binding himself to another family, this time made of peers with the power to defend themselves. Further, it's later disclosed that at some point in the past, army doctors experimented on Yu to give him special powers. The experimentation has the unfortunate effect of sometimes changing Yu into a destructive berserker, and again, he has to learn discipline to protect his squad-- to say nothing of experiencing new trauma when his former friend Mikaela, who's continued to dwell with the vampires but who does not bond with their villainous ilk, shows up on Yu's radar once more.

The matter of "special powers" is the weakest link in the SERAPH cosmology. It's loosely implied that the only reason that the Demon Army can fight the vampires at all is because the soldiers have been trained to use big, bad-ass weapons-- swords, scythes, guns, bows-- which channel the power of real, supernatural demons. How humans came to channel demons through weapons is never explained, nor is their any explanaton when the viewer starts seeing vampires use the same sort of fantastic weapons. In fact, it was only through a DVD commentary that I learned that the vampires "feed" their weapons with their own blood, rather than making soul-deals with the resident weapon-demons. This would explain why so much of the serial's melodrama revolves around the human soldiers endeavoring to empower themselves against their enemies, but without turning themselves into demon-possessed vehicles, who would implicitly be just as hard on humanity as the vampires.

Despite all the melodrama, Yu and his support-cast are pretty simplistic types. There's a Loyal Friend to Yu, who duplicates some of the appeal of Mikaela in the hero's new family; there's a couple of girls interested in the ferocious loner; there's the mentor who believes in constantly busting his student's balls to make him succeed. Only one character, a guy named Shiho, doesn't feel too shopworn, in that he's the hero's rival, always quarreling with him about one thing or the other, though inevitably he and Yu become just as strongly bonded as anyone else in the squad.  For that matter, the long-deferred meeting between Yu and Mikaeala doesn't really pull any dramatic heartstrings that I haven't felt in a hundred similar SF-melodramas.

Finally, the closing episodes toss in a handful of poorly conceived Judeo-Christian myth-references. Because of the special experiments performed on Yu, he is the titular "Seraph of the End," which just means that he can call upon a host of new powers. Oddly, he also becomes known as "the King of Salt" because he can turn people into salt or make weapons out of salt, which seems like a rather involved reference to the Old Testament fate of Lot's Wife.

Visually, SERAPH's action and costume design is worth watching. As a story, it's got no new tricks in its bag.
Posted by Gene Phillips at 12:43 PM
Email ThisBlogThis!Share to TwitterShare to FacebookShare to Pinterest
Labels: combative adventures, the marvelous