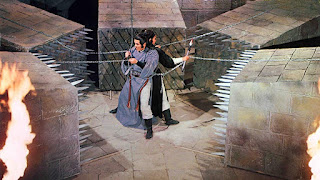 
Of these two low-budget chopsockies, SHAOLIN KUNG FU MYSTAGOGUE-- also given many other names- definitely has the best title of the two. But both are just films in which martial-arts heroes are given some paper-thin motivation to ramble around the countryside back in medieval days, getting into fights with villains wielding exotic weapons. The two flicks are also linked by the fact that the weapons are so wild that I can't even conceive a modestly probable "uncanny" explanation for them, in contrast to, say, the buzzsaw-weapons seen in BANDITS, PROSTITUTES, AND SILVER.

MYSTAGOGUE (which term means a teacher of mystical doctrines) nominally concerns the transition of power between the rightful Ming dynasty and the usurping regime of the Chings. The usurpers seek the Ming prince in order to execute him, while two skilled soldiers, Shao (Carter Wong) and his sister Fang (Hsu Feng) seek to protect said prince. One of their recurring opponents is Yeun Ming, an enforcer who boasts the film's most impressive weapons: a pair of Tibetan-made knives called "the bloody birds." Not only can Yuen cause the knives to spin about like rotary wheels when he holds them, he can also toss them like boomerangs. The knives cut human flesh or cause explosions when they hit non-living targets, but the weapons always return to their wielder. (At one point, Yuen even claims "they're magnetic!")

There are also other, more uncanny phenomena. Shao's teacher (possibly the mystagogue of the title) refuses to teach him a special Shaolin move, which can defeat any enemy but causes the death of the practitioner-- and at the climax, the Shaolin monk gets the chance to show off both the move and its costly effects. Shao and Fang get trapped in rooms filled with moving walls or weapons twice. However, neither Wong nor Feng-- who both essayed much more interesting heroes in other films-- can do more than go through the motions. 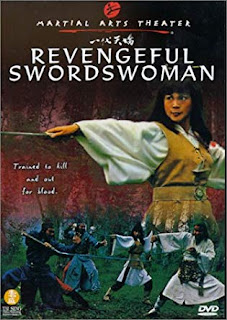 REVENGEFUL SWORDSWOMAN is far from the best film in the martial-arts repertoire of Chia Ling. Yet, even though the narrative bounces around too wildly to keep track of, at least it benefits from centering upon Chia's character Hsiang, who calls herself "the Heartless Woman."

In one of the most hard-to-follow setups, Hsiang is learning kung-fu out in the country from her sifu, until one day he decides to fling her off a 200-foot-tall cliff. She survives and chases him down for an explanation. He claims to have killed her father long ago, after which he chose to instruct her in the martial arts, but fails to reveal any reason for this contradictory behavior. He then locks her in a cage and leaves her.

A handsome young man named Ku lets Hsiang loose, and seems interested in her, though Hsiang has only bloody vengeance on her mind. Ku tags along as she begins looking for her sifu. Eventually it's revealed that the sifu was lying; that the real killer of Hsiang's father was a man named "Lord Ku," who is Young Ku's uncle. (There's also a side-plot in which Ku believes that his father was killed by the uncle, but the father turns out to be alive at the end.) While Hsiang embarks on her quest, Lord Ku sends various adversaries against her and her companion, such as a one-armed boxer (a shout-out to Jimmy Wang Yu's "one-armed swordsman" series) and a female swordswoman. However, no opponent is more impressive than Lord Ku himself, who carries around two metallic skulls on the shoulders of his outfit. When he bids them to do so, the skulls launch themselves from his shoulders, fly around and bite people. The film's budget is too low to make this memorable visual touch come alive, but the film still earns some points for coming with something other than the usual swords, whips, and flails.

Posted by Gene Phillips at 2:59 PM
Email ThisBlogThis!Share to TwitterShare to FacebookShare to Pinterest
Labels: the marvelous