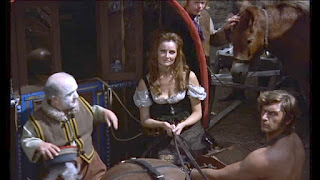 
VAMPIRE CIRCUS, while not among the best of the seventies Hammer films in terms of its story, boasts a far stronger visual style than most films in that oeuvre. Though credited as an original story, it bears more than a little resemblance to Charles Finney's sardonic 1935 novel THE CIRCUS OF DOCTOR LAO, in that it concerns a circus full of weird beings who visit a rural town and uncover the residents' secret sins. Indeed, CIRCUS has more in common with the Finney novel than did the 1964 SEVEN FACES OF DOCTOR LAO, which translated Finney's ironic concerns into a more comical and sentimental effort (though, truth to tell, I like SEVEN on its own terms).

CIRCUS takes place in a Serbian village named Stell. The script doesn't trouble to explain the provenance of a vampire nobleman, one Count Mitterhaus, who resides in the requisite castle, and his activities seem to come as a big surprise to schoolmaster Muller. One moment he's gamboling around the countryside with his wife Anna and their little girl. The next, Anna steals away with the kid and heads straight for Mitterhaus's castle. It's not clear whether or not the count used mesmeric powers to summon Anna or not, but once she's there, she eagerly gives up her own daughter for the count to drain dry. Mitterhaus then rewards Anna with a long sex-session, while Muller rouses the local men of the town to help him invade the castle. Muller and the other locals catch Anna and Mitterhaus in flagrante delicto, but the vampire puts up a good fight before Muller stakes him. However, the Count curses the whole village of Stell as he begins to die.

At this point, the script shows the townfolk in a upright moral light. However, in the next scene the men of the town force the traitorous Anna to run a gauntlet, battering her with clubs until Muller intervenes. While Anna's actions are meant to be condemned-- and the script doesn't give her the "out" of having been mentally enslaved-- there's the sense that the townspeople have become tainted by their gratuitous act of retribution. Anna escapes to a secret room, where the dying Mitterhaus tells her to seek out his equally vampiric brother Emil, in order to avenge Mitterhaus.

Fifteen years later, a plague breaks out in Stell, and though the disease doesn't have that much impact on daily life, it moves the local constables to quarantine Stell, setting up armed men who will shoot anyone who tries to leave the plague-town. Nevertheless, a traveling circus somehow bypasses the quarantine. Thus the embattled townspeople are offered some apparent respite from their troubles, by watching the bizarre activities of the circus performers, having no idea that their leader Emil is a vampire.

Despite the title, though, there's not nearly as much vampirism on display as weird forms of circus-magic. Not only can Emil transform into a non-canonical animal-- a black panther-- there's also a tiger-woman, a magic mirror, a gypsy woman, a nasty dwarf, a strongman (David "Darth Vader" Prowse), and twin aerialists, a brother and sister whose every scene hints of "incest." One of the local young girls, Rosa, becomes intoxicated with Emil's charms, and one of the locals is killed by a black panther. CIRCUS doesn't attempt to construct one-on-one parallels between the repressions of particular residents and their "opposite numbers" among the performers.  Belatedly the viewer finds out that the circus-people have an agenda beyond just causing havoc, for Anna is secretly with the group, and she plans to bleed a child over the still intact body of Count Mitterhaus in order to revive him.

If CIRCUS has an overriding fault, it's that none of the characters on either side are particularly memorable. Were I to attempt to suss out who is the "star" of the show, it wouldn't be one character, but the entire ensemble of the evil circus.

Considering the financial limitations of Young's movie-- at one point he was simply ordered to halt filming, and another employee edited the movie into its finished form-- the fact that CIRCUS holds together as well as it does makes it all the more remarkable.
Posted by Gene Phillips at 3:18 PM
Email ThisBlogThis!Share to TwitterShare to FacebookShare to Pinterest
Labels: the marvelous