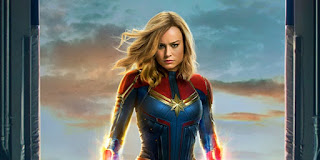 
Given all the advance animosity directed at CAPTAIN MARVEL-- that it's "anti-male" or a "Mary Sue" film-- I was surprised that its feminist politics were much more restrained than the racial politics of other MCU films, ranging from BLACK PANTHER to IRON MAN 3. I had expected a more aggressive approach, since MCU's version of the Marvel character has been designed to challenge the far greater fame of DC's Wonder Woman and her recent successful DCEU film.

It's possible that the MCU chose not to emphasize a "hard feminist" approach for any number of reasons. It could be because at least one franchise-film to take such an approach, 2016's GHOSTBUSTERS, bombed at the box office. In addition, it's been rumored that future MCU films will start to "phase out" some characters, such as Iron Man and Captain America, and seek to build up new ones for future audiences. But by choosing to follow Marvel Comics' lead-- that of applying the "legacy name" of Captain Marvel to the character formerly known as Carol Danvers /Ms. Marvel-- the MCU people had to deal with the fact that this particular character has never been quite as well-constructed as long-time favorites like Tony Stark and Steve Rogers.

Some background on the character and my knowledge of her: she began as a supporting-character in the late 1960s series CAPTAIN MARVEL. This character, a Kree warrior who assumed the identity of an Earth-superhero, represented Marvel Comics' first utilization of the then-unclaimed name of the famed Golden Age hero. The Kree hero remained in publication through 1979, and that may have encouraged the company to launch a female version of the Captain. I should mention, though, that the initial idea of a "Ms. Marvel" was to launch X-MEN's Marvel Girl in her own series, during the period when the X-franchise was in limbo. Instead editors decided to take support-character Danvers and postulate that, because she'd been exposed to a Kree radiation-device in an earlier story, she transformed into a character with powers that mostly (though not entirely) resembled those of Captain Marvel. Somewhat later, the first "Marvel Captain Marvel" died and Ms. Marvel's first series was cancelled. It wasn't her last series, but she had somewhat better visibility as a long-term member of The Avengers. Meanwhile two other characters utilized the name Captain Marvel, though neither of them was any more successful than the first one. In 2012, Marvel made the decision to give Danvers a shot at being the newest Captain Marvel. This is the only period of the character's history with which I'm unfamiliar, though I should add that Danvers does not seem to be much more financially successful than any earlier "Marvel Captain Marvel."

During all of this time, Carol Danvers never really caught fire as a character, either in her own feature or in The Avengers. For that reason, because her status as an "accidental Kree" was the most remarkable thing about her, I speculate that the movie CAPTAIN MARVEL chose to focus on this idea, in much the same way that GUARDIANS OF THE GALAXY riffed on the idea of the five comics-characters to re-invent them for film.

The re-invention here bears some similarity to the spy-series known as the "Bourne movies." The movie introduces a character named "Vers" (pronounced "Veers"), who lives as a soldier on the Kree homeworld Hala. She's an amnesiac who can remember nothing about her early history, but she has innate skills as a soldier, and has been schooled in upgrading her skills by her commander Yon-Rogg (old Marvel fans will recognize this as an old villain's name). She believes herself to be a loyal Kree, devoted to saving her people's worlds from incursions by the evil shapeshifting Skrulls. However, the script tosses in a few allusions that suggest that the Kree military is oppressive rather than noble, rather along the lines of the 1997 STARSHIP TROOPERS and its critique of miliarism.

Now, once one finds that Vers is really an amnesiac Carol Danvers-- an Earthwoman given special powers by an event on Earth-- the plot largely falls apart. The Kree are trying to figure out how to tap Carol's powers, so do they put under lock and key for endless analysis? No, they send her out on military missions, which leads to her getting captured by Skrulls and very conveniently transported to her birth-world by said shapeshifters, who have absolutely no reason to do so. But once Vers is on Earth, she continues to benefit from tons of good luck, from meeting a young version of Nick Fury to finding out that her Skrull enemies are not all they seemed to be. (One of these is that the Skrull leader Talos has an immutable British accent, apparently on the theory that one can't have a modern superhero film without a Brit villain.)

While the script is nonsense, I applaud directors Boden and Fleck-- who also collaborated on the script-- for keeping the action fast and furious, the better to obscure the plot holes. (BLACK PANTHER could have used more action and less genuflection to racial politics.) On the minus side, the humor is not as strong as it is in the average MCU film. Since the film's action takes place in 1995, there are some expected touchstones, as with a still functioning Blockbuster store, and a delightful moment in which the late Stan Lee, playing a commuter, is seen rehearsing his line for the 1995 film MALLRATS. I enjoyed how the script worked in a shout-out to Monica Rambeau, who became the "second Marvel Captain Marvel," and I wasn't even fond of that character. Yet the scenes in which young Monica bonds with the believed-to-be-dead Carol Danvers show Brie Larson's limitations. In this role, at least, Larson isn't able to convey more than the most basic emotions of confusion or anger. Her more numerous scenes with Young Nick Fury are similarly bereft of good chemistry, and the design of her costume is also unimpressive.

Returning to the subject of the movie's feminism message, it is present, particularly given that an older female character (Annette Bening) takes roughly the same place that the Kree Mar-Vell did, and who is thus indirectly responsible for Carol's transformation. Still, I can imagine ways in which CAPTAIN MARVEL could have been far, far more "woke" and thus far more aggravating. As with the GUARDIANS OF THE GALAXY films, this is just a moderately entertaining superhero flick, never interested in re-inventing the wheel. But there's something to be said for formulaic conservatism, particularly when one regards how badly it turns out when creators' reach utterly exceeds their grasp (ct. the MCU's abysmal handling of the THOR franchise).