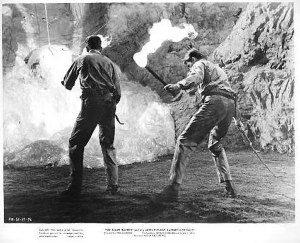 
The opening of THE FLAME BARRIER-- a film which appeared in theaters in April 1958-- contains a potential mythic response to the discoveries of the Explorer 1 and 3 satellites launched by the U.S., respectively, in January and March of that year. Whether the filmmakers got their data from the satellite-findings or not, presumably someone in the scripting department caught on to the idea that the Earth was surrounded by zones of charged particles, eventually named the Van Allen radiation belts. Certainly some such speculation must've prompted writers Pat Fiedler and George Worthing Yates to imagine the Earth surrounded by a "flame barrier." The prologue spends no time analyzing what this mysterious barrier is made of, much less dropping any hints that the barrier apparently plays host to some form of non-human life. All the viewer knows is that a satellite containing a lab chimp is sent up into the Flame Barrier, and falls to Earth in a Mexican jungle, the victim of man's ambition to know the heavens.

Though the American experts believe the satellite destroyed, a businessman named Dahlmann braves the jungle in his belief that the satellite has survived the catastrophe. When Dahlmann doesn't return from his trek, his wife Carol goes looking for guides through the Mexican jungle. She finds two brothers, the affable but irresponsible Matt and the hard-bitten, driven Dave, who make fair embodiments of "pleasure principle" and "reality principle." Dave, the boss of the jungle-guide operation, doesn't want to go chasing missing husbands during Mexico's rainy season, but he lets himself be talked into the project by Carol's offer of a lot of money. The fact that Carol's a looker no doubt helps-- though brother Matt is the first one to flirt with her a little-- and maybe Dave, despite his rough exterior, senses some potential in a woman who may want to bury her rich husband more than she wants to rescue him.

Since the expedition can't reach the fallen satellite for many miles, the script has to throw in various encounters with beasts, as well as Dave heaping scorn on Carol for being a jungle-greenhorn. Naturally, though she expresses irritation, on some level Dave intrigues her for being a "hard get," in contrast to the more gentlemanly Matt. As the travelers proceed, they get inklings that both the local animals and the local tribes have been thrown into chaos by the falling of the satellite, though none of the principals know quite what to expect. The most intriguing detail is that the trio encounter a threesome of Indians, one of whom was the leader of his tribe and was set out in the jungle to die from poisonous ants. Possibly the ex-chief was blamed for the bad juju from the satellite, though the script doesn't say so, not specify the standing of his two buddies. The three tribesmen end up acting as bearers for the three travelers, though their main purpose is to be "red shirts."

By the time the expedition reaches the camp of the missing Dahlmann, Carol and Dave have fallen hard for each other, and Dave seems to want to find his rival in order to expunge his claim to Carol. It doesn't hurt that she's told him that her marriage was on the rocks thanks to Dahlmann's obsession with his business affairs and with his space-hobby-- which puts the absent husband in the same hubristic ballpark as all those pointy-headed space-scientists.

Happily for Dave, Dahlmann is sincerely dead, having been absorbed into a blobbish life-form that now inhabits the satellite. No one asks how this blob-thing existed up in Earth's statosphere; it might as well be one of Sinbad's colossal creatures for the backstory it gets. The blob emits a gradually expanding electrical field that's been playing havoc with the jungle-life, so Dave and Matt must figure out a way to destroy the spawn of the flame barrier. Unhappily, there has to be one more demise of one more "red shirt"-- and it just happens to be the only other person who even slightly looked Carol's way.

The film ends with a coda focusing on the space-race's continuing attempts to plumb the mysteries of space, but the wording makes the prospect far more enigmatic than anything audiences would've seen in the blithe assurances of, say, DESTINATION MOON.
Posted by Gene Phillips at 2:12 PM
Email ThisBlogThis!Share to TwitterShare to FacebookShare to Pinterest
Labels: the marvelous