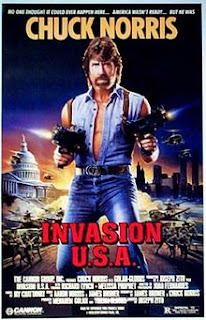 I only re-screened this lowbrow piece of "Cannon fodder" (bet that's not the first time someone made that pun to put down a Cannon Films release) because its concept bears some resemblance to that of the previous year's RED DAWN. I stated that I deemed the world of DAWN to be an "alternate world" portraying "a United States that can be easily invaded by ground forces armed with no artillery greater than helicopters with rocket launchers." INVASION's star and co-scripter Chuck Norris asserted that he made the film in response to articles about terrorists running wild in the U.S, and it's certainly possible that he never saw RED DAWN, though it was the 20th high-grossing films of 1984.

Certainly nothing about the script follows the beats of DAWN's plot. There's no sense that a major war has broken out; it's just evil Russian Rostov (Richard Lynch) abetting various crazed terrorists to attack Florida. If there was a stated point to the invasion, I must have missed it.

Ex-CIA agent Matt Hunter (Norris) happens to be working in the Everglades. and you would think that all this terrorist activity would affect him like a fire-engine bell to a retired fire-horse. But Hunter ignores the situation until the dirty Commies kill one of his friends. The setup would've perfect for the line "This time it's personal," but sadly, this immortal phrase wouldn't be coined until JAWS THE REVENGE came out two years later.

The action is much more workmanlike than Norris's Cannon film from the previous year, MISSING IN ACTION, which enjoyed the same director, Joseph Zito. This may be a consequence of the script's emphasis on guns and rocket-launchers rather than Norris's signature martial-arts moves, and if one had never seen a Norris film before, that viewer would never think he was any sort of kung-fu actor. Lynch makes an eminently hate-able villain, but Norris, after easily wiping out most of the terrorists, vanquishes the Big Bad much too easily. Norris, though never known for even decent performances, gives one of his most robotic renditions up to that point.

Melissa Prophet plays a spunky American reporter who looks like, but does not become, a romantic interest for Hunter.
Posted by Gene Phillips at 1:40 PM
Email ThisBlogThis!Share to TwitterShare to FacebookShare to Pinterest
Labels: combative adventures, exotic lands and customs (n), the naturalistic