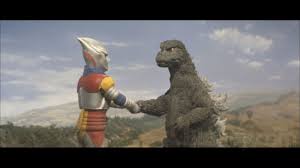 My initial reaction to GODZILLA VS. MEGALON was about the same as that of most critics. I thought it a terrible exemplar of the "kiddie Godzilla" films of the last Showa years. particularly withe respect to having the Big G team up with a giant-robot superhero named Jet Jaguar.

However, in my more recent viewings, I found MEGALON somewhat appealing on the purely kinetic level. Though it was made by roughly the same team that executed the previous film in the series-- GODZILLA ON MONSTER ISLAND, execrable for its grating use of stock footage-- and was also shot on a rapid schedule, director Fukuda turned out what may be the best of the "cotton candy" Godzillas.

The action may be marginally better this time because MEGALON wasn't conceived as a Godzilla film, but as a pilot for the robot-hero Jet Jaguar. Thus on some level the filmmakers started out with the idea of doing a lively kids'-action film, rather than just churning out another routine entry in the Godzilla series. Thus, even after the bigwigs had ordered the inclusion of the Big G to make MEGALON more marketable, Fukuda and company had already thought out the project in terms of the "giant robot" subgenre.

The principal human actors are an inventor, his nephew and his buddy, all involved in testing Jet Jaguar (who varies between being human-sized and gigantic). As characters they're negligible, but Fukuda puts them through some decent action-sequences, in marked contrast to the stultifying antics from MONSTER ISLAND. As for the big monster-battle, Gigan, also improbably recycled from MONSTER ISLAND, is as boring as before, and Godzilla seems out of place in this world. However, Jet Jaguar and the beetle-like Megalon have some OK moves in some scenes, and so the monster fights are slightly better than those of MONSTER ISLAND-- even if MEGALON does include a much-derided scene in which Godzilla launches a "flying kick"-- twice!-- at one of his opponents.

The Seatopians are the monster-unleashing villains this time. They're a race of humans who dwell in a sunken city and take exception to the nuclear tests on the surface, and they unleash Megalon to quell impudent humanity. They're also a marginal improvement on the villains of MONSTER ISLAND, but only just.

This is one of the few Godzilla films of the Showa period with no significant female characters.

Posted by Gene Phillips at 1:16 PM
Email ThisBlogThis!Share to TwitterShare to FacebookShare to Pinterest
Labels: combative dramas, the marvelous