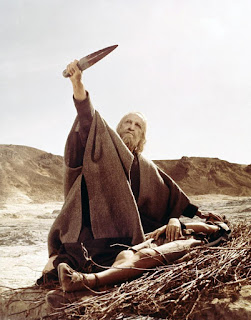 
You've got to hand it to Cecil B. De Mille. In his religious epics, he might have messed with the scriptures of both Jews and Christians, but he knew how to make the Bible into good cinematic entertainment. In contrast, even watching just the "Noah" portion of this John Huston 1966 film is likely to make any viewer think he just wasted 40 days and 40 nights so doing.

In most cases, director Huston was also a master of good entertainment, but the material of the Christian Bible's first 22 chapters is totally beyond his depth. I suspect that he was for the most part a hired gun on this project, given some anecdotes to the effect that his producer, Dino de Laurentis, originally had thoughts of making a ten-hour film of the entire Bible. At some point the decision was made to adapt most of the significant stories from the creation of the world to the near-sacrifice of Isaac. This could have worked as a study in contrast between the constant disobedience of God's chosen people-- the eating of the apple, the Tower of Babel, Sodom and Gomorrah-- and the one time when one chosen patriarch, Abraham got it right.

I'm not familiar with the plays of Christopher Fry, but I would suspect that he might've been signed on to this project thanks to an uncredited writing contribution on 1959's BEN HUR and a credited contribution to 1961's BARABBAS. Both are decent examples of religious epic, but both are also based on mainstream literary novels about matters Christian. Fry's script gives no sense of understanding any of the cultural or metaphysical meanings behind the various Biblical tales, but seems content to dole out familiar passages to satisfy anyone who might be parsing things to see if he got it right-- which is ironic, given that the film leaves out a lot of stuff. (It seems particularly strange that the script is forthright about having Lot invite the citizens of Sodom to "know" his own daughters rather than assault the angels of the Lord-- yet the film shrinks from showing the conclusion of Lot's story, in which his daughters, believing the world in chaos, get their father drunk and have sex with him, presumably with designs of repopulation.)

But it hardly matters at this late date whether the greatest burden of blame for this abomination of incredible dullness, be it Fry, Huston, or deLaurentis. Many famous actors are on display, but the only one who has a grasp of the material is George C. Scott, who plays Abraham with all the flinty gusto of a true Hebrew patriarch.

Posted by Gene Phillips at 2:31 PM
Email ThisBlogThis!Share to TwitterShare to FacebookShare to Pinterest
Labels: the marvelous