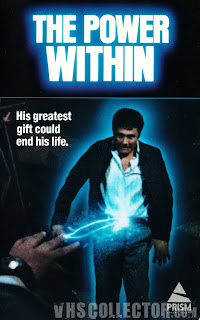 
After seeing a YouTube rip of THE POWER WITHIN, I hastened to check out the credits of the TV-film's writers and director. Although none of them had worked on THE INCREDIBLE HULK teleseries when it debuted the year before this failed pilot, I speculate that someone behind the series did a quick read of the comic-book origin of the Hulk, and decided to use elements of that story-- which the HULK TV-show largely ignored-- for a brand-new TV-superhero.

This indebtedness isn't obvious at the start. Young free-spirit Chris Darrow (Art Hindle) and his buddy Bill run a shoestring flight-school operation, with Darrow acting as the daredevil pilot who brings in the customers. Then one night, as he's driving home in the midst of a lightning-storm, his car blows a tire (paging Bill Bixby) and as Darrow gets out to fix it, he's struck by lightning. Instead of being killed, he survives and learns that he has the ability to fling bolts of lightning from his fingers.

So far, the resemblance shows influence only from the TV show. However, the first thing Darrow does is to seek help from his estranged father, General Tom Darrow. As it happens, the General's research department just happens to be working on a device that synchronizes with Darrow's current predicament. The  military's analysis shows that Darrow now needs to recharge himself at regular intervals, or he'll die, though the army's new tech can help him with his self-regulation. This situation forces Darrow, the free spirit rebel, to work with his by-the-book old man. To be sure, neither of them expect a cell of local spies to mistake Darrow as a test subject for their new research, but the spies try to kidnap Darrow, and continue to cause the new hero grief for the remainder of the movie. The coda establishes that the General may call upon his supercharged offspring for missions at times, and that Darrow himself, having tasted the spying life, isn't totally averse to a new series of adventures.

There are only a couple of action-scenes wherein Darrow demonstrates his bolt-tossing powers, as well as a degree of super-strength, but the script, while nothing special, does keep a steady stream of incidents to avert tedium. POWER WITHIN is nothing special-- the father-son, authority/rebel conflict is certainly banal-- but it boasts a cast of familiar actors and proves livelier than most failed pilots.


Posted by Gene Phillips at 3:51 PM
Email ThisBlogThis!Share to TwitterShare to FacebookShare to Pinterest
Labels: combative adventures, the marvelous