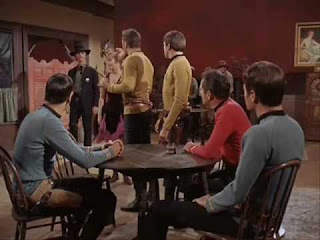 Here's a truly lame episode, with none of the thought-experiment elements found in the much-maligned "Spock's Brain." Only the commitment of the performers keeps "Spectre" from being an utter waste of time.

The episode begins by using rickety logic. Kirk is told to contact a reserved alien race, the Melkotians. The Enterprise's access to Melkotian space is blocked by a space-buoy that warns them to keep away, and though the Federation representatives don't precisely destroy the buoy, they help bring about its destruction.

This bit of "gunboat diplomacy" doesn't work out as well as it did in the real world. The Melkotians retaliate by spiriting five crewmen of the Enterprise-- Kirk, Spock, McCoy, Scott and Chekhov-- to an illusory world that slightly resembles Dodge City of the 1880s. No reason is given as to why the aliens chose these five crewmen out of the two hundred-plus on the ship. The city looks like no more than a series of incomplete movie-set constructs, which of course it was in reality, and Spock's best explanation for this anomaly is that the Melkotians may have left the town incomplete because they can't fully access human memories for the simulation. Yet the aliens seem able to make most of the important historical connections pretty well, for once the crewmen interact with the "people" in this simulated town, Kirk and company realize that they've been cast as the "Clanton gang." Kirk rather pointlessly tries to persuade the townspeople-- including the Clantons' enemies, Wyatt Earp and his two brothers-- that Kirk and his men are really officers from a space-navy, but everyone is convinced that the Clantons are doomed to be gunned down by the Earps, just as history relates.

Though the director manages to put a great deal of tension into Gene Coon's weak script, he can't overcome some of the absurdities. One might think that when Kirk finds himself in a town that looks made-up out of odds and ends, the first thing he would do would be to try to get away. Instead, this is about the third or fourth thing Kirk does, only to find, predictably, that an alien power restrains the guests from leaving. They dope out that the whole exercise is an attempt to punish them for their transgressions. Yet, even after seeing the incomplete simulation of Dodge, the five crewmen-- at one point minus Chekhov, who apparently "dies"-- can't seem to work out that the whole thing's an illusion. The heroes have to see a particular physical law transgressed before they figure out how to escape the fate of being killed at the "gunfight at the OK Corral."

The only strong scene in this mishmash is a funny moment when Scotty finds an excuse to do a little tippling in the line of duty.
Posted by Gene Phillips at 3:05 PM
Email ThisBlogThis!Share to TwitterShare to FacebookShare to Pinterest
Labels: combative dramas, the marvelous