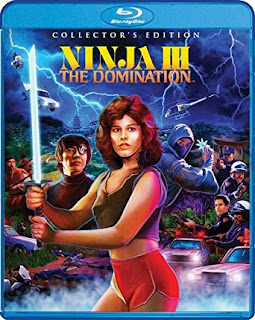 I don't think NINJA III has nearly as much fame in the "so bad it's good" annals, but it deserves at least as much perverse love as, say, TROLL 2, in terms of being a nominally serious film that turned into total insanity in practice.

This was the third of Cannon's "ninja films," which all included the briefly famous Japanese actor Sho Kosugi, who's always playing a different ninja in each flick. Here, Kosugi is essentially a supporting character who comes looking for the main villain and makes possible the evildoer's defeat. Indeed, though ads usually feature hot young thing Lucinda Dickey as the main character, she too is a devil within her body, more or less in the way that Regan of THE EXORCIST is secondary to the demon who possesses her.

Though director Sam Firstenberg provides decent direction-duties, it's clear that scripter James Silke could not have cared less about story-logic. I don't recall if Cannon's two previous films in the "series" alluded to the widespread belief that Japanese ninjas were supposed to be masters of subtle assassination. That approach, though, isn't good enough for NINJA III's central villain "The Black Ninja," apparently so named for his black heart, since he's always in grey. For some unknown reason he seeks out and assassinates a "famous scientist" and the man's bodyguards, but does he do it in a place of relative concealment? No, he waits until they're out on the golf links, where he can be seen in broad daylight. A small army of cops respond to the murder, and the Black Ninja nearly beats all of them, even though they have guns and he just has archaic weapons like a sword and throwing-stars.

Still, one cop manages to shotgun the ninja in the back. He staggers away, and happens upon a telephone-repairwoman, Christie Riley (Dickey), who just happens to be out and about fixing lines. Even dying, the supernaturally powerful killer entrances Christie, though it's unclear as to whether he immediately possesses her or not. She's next seen at the police station being grilled by cops, though one young officer, Secord, wants to heat her up in a more friendly manner. Since we later see Christie take the dead ninja's sword from her repair-van, apparently she was hypnotized into putting the sword into her van, and then returning to the scene of the ninja's death-- I guess.

Secord pursues Christie, but she can't see him for spit until, well, he gets mad at her indifference-- after which she immediately falls into bed with him. Yeah, that's the way male-female relations worked in the eighties. Second doesn't seem too concerned when he witnesses her beat up a trio of thugs with her kung-fu skills, though Christie doesn't seem to know where they come from.. :Later, in the movie's most lovably cheesy scene, the Black Ninja's spirit manifests in Christie's apartment, inhabiting not only his sword but also-- I kid you not-- a video-game console.

So Christie gets fully possessed, seeks out the Ninja's store of weapons, costumes herself and goes hunting the cops responsible for slaying the Black Ninja. In the meantime, a good ninja named Yamada (Kosugi) shows up in the States, looking for vengeance against his ninja enemy. During the time that he spends nosing around, several innocents die at the evildoer's hands, but Yamada's focused on stealing the Black Ninja's bullet-riddled corpse. As for Secord, he's observed enough odd behavior from Christie that he takes her to a Japanese shaman for exorcism. The ritual fails, though Secord gets confirmation of her possession-- yet he still doesn't do anything to confine her, even just for her own good.

With the help of Second and a briefly in-control Christie, Yamada manages to transfer the Ninja's spirit back into his dead body. This somehow makes it possible for the villain to live again, and to fight Yamada at full power (even tunneling through solid stone). The good ninja wins, of course, though the victory makes no real sense-- thus in keeping with the rest of the film.

Posted by Gene Phillips at 2:49 PM
Email ThisBlogThis!Share to TwitterShare to FacebookShare to Pinterest
Labels: combative adventures, the marvelous