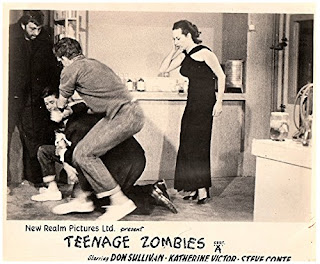 
TEENAGE ZOMBIES, one of the few films by director Jerry Warren that didn't cobble together segments from other films, is worse than any of Ed Wood Jr.'s offerings, but it'll never equal Wood's oeuvre in terms of being "so bad it's good." Left to himself, Warren produced a soporific take on the sort of "mad scientist" films made famous by the lower-rung filmmakers like Columbia and Monogram back in the 1940s. However, almost without fail Warren "directs" ZOMBIES with an unending cavalcade of tedious medium shots. Given that all of his actors were no-names-- including Katherine Victor, who would gain a measure of fame later with Warren's WILD WORLD OF BATWOMAN-- it may be that he saw no reason to bother with time-consuming close-ups.

Whereas the stars of the forties potboilers were almost always adults, Warren played to the fifties' penchant for older-juvenile films by having two teenaged couples go looking for a place to water-ski. Traveling by boat to a remote island, the teens witness some strange men stumbling around, again like the non-violent zombies of Classic Hollywood. Then their boat mysteriously disappears. They look for answers at a mansion, the only building on the isle, and meet the eccentric Doctor Myra (Victor), who is served by a bearded hulk named Ivan. After a few pleasantries, Myra has Ivan toss the teens into her private prison. Myra is your basic mad scientist, working on a "zombie-making" serum for agents of an "Eastern" power. Indeed, after jailing the teens, Myra confers with the foreign agents, who reveal that their bosses are planning to make a direct nuclear attack unless the scientist can deliver bombs capable of reducing Americans to the status of obedient slaves.

There's also a subplot about two other teens trying to get the local sheriff to investigate their friends' disappearance, and this leads to the unlikely revelation that the sheriff in cahoots with the spies. As usual in mad-scientist movies, the demented doctor is the focus of the story, and Victor tries to give her unrewarding role some of the passion of a Bela Lugosi megalomaniac. However, despite a few lackluster fights when the imprisoned teens break free, and an experimental gorilla who doesn't do much of anything, the only Wood-like touch in this depressing flick is Doctor Myra's penchant for greeting her guests in clingy ball-gowns. She even wears her lab coat over such a gown. Maybe someone involved thought that, no matter how mad she was, she had one mitigating quality: that she was a really snappy dresser. 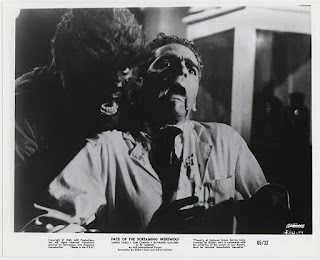 FACE OF THE SCREAMING WEREWOLF is more representative of most of Warren's career, but it might please the so-bad-it's-good crowd in that it's more overtly nonsensical.

WEREWOLF has very minimal original footage, and is for the most part an unholy mashup of two dubbed Mexican films. Warren had already used a lot of scenes from the 1957 Mexican film LA MOMIA AZTECA in his 1963 American release ATTACK OF THE MAYAN MUMMY, but for WEREWOLF he used only a few draggy sequences to provide the opening of the newer film. The bulk of the 1964 film was taken from a 1959 Mexican comedy, LA CASA DEL TERROR, starring comedian Tin Tan and horror-icon Lon Chaney Jr. as a werewolf. Warren is guiltless in CASA's decision to associate the Chaney werewolf with some sort of Egyptian sarcophagus-- but in a vain attempt to provide continuity between the disparate scenes from different movies, Warren's version asserts that there are two mummies running around. One is ancient (the Aztec Mummy), and the other is a modern werewolf whom someone or other wrapped in mummy-bandages. Just as a guess I'd surmise that the original makers of CASA DEL TERROR were just having fun with Chaney's dual image of both werewolf and mummy, which might've played better in an actual comedy. But Warren snipped out almost all of the Tin Tan scenes, leaving a hodgepodge of scenes in which the wolf-man runs around attacking people, mostly some scientists who sought to revive him for reasons unknown. The scenes from the 1959 film aren't exactly good, but they're certainly livelier than anything in TEENAGE ZOMBIES.


Posted by Gene Phillips at 2:49 PM
Email ThisBlogThis!Share to TwitterShare to FacebookShare to Pinterest
Labels: the marvelous