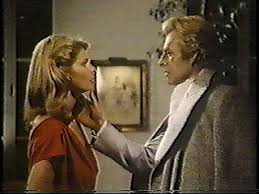 
I had a dim memory of enjoying VAMPIRE when it debuted as a TV-movie in 1979. Given that it concluded with two vampire hunters still desperately seeking the vampiric villain of the story, I think I guessed it was a failed pilot. However, in my re-watch I found it pretty much devoid of good vampire-flick entertainment.

The film's only positive aspect is the actor playing the vamp, Richard Lynch. As Anton Voytek, a 700-year-old bloodsucker revived by the unearthing of his burial-place, Lynch delivers the quintessential "vampire as continental charmer." However, the script by co-producer Steven Bochco-- who later gained fame doing HILL STREET BLUES and other cop-shows-- is never more than blandly functional, leaving the two vamp-hunters-- played by Jason Miller and E.G. Marshall-- nothing to work with. Miller is particularly shortchanged, for he's meant to be the identification character, the guy who loses his wife to Voytek. But Miller's character of architect John Rawlins is numbingly dull, and Marshall's ex-cop is no better. A possible love interest for Rawlins is introduced to no greater effect.

Given that Bochco would become famous for his work with acting-ensembles, I speculate that he simply had no feel for the material. Bochco hauls out various routine cliches of the subgenre and shows no desire to give them emotional resonance, not even the scenes with Voytek seducing young women. The viewer expects, for instance, that he'll make Rawlins's wife an undead in order to torment the man. But she's dead for so long in the story that when she shows up, the viewer's almost forgotten her.

The horror genre is forever indebted to the suits who kept this iron-poor pilot from becoming what would probably have been an equally tired series, and perhaps contributed to Bochco getting on a better path.

Posted by Gene Phillips at 2:22 PM
Email ThisBlogThis!Share to TwitterShare to FacebookShare to Pinterest
Labels: the marvelous